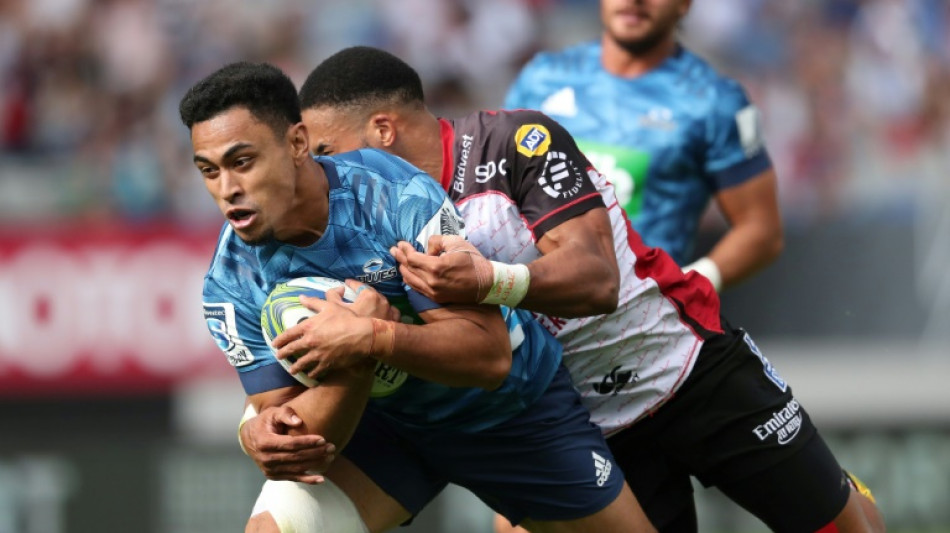 The Auckland Blues crushed the Queensland Reds to tighten their grip at the top of the Super Rugby Pacific table, while the Canterbury Crusaders inflicted a rare defeat on the ACT Brumbies at the weekend.

Coach Leon McDonald's red-hot Blues have now won 11 on the trot, unbeaten since narrowly losing their season opener 32-33 to the Wellington Hurricanes.

They blitzed the Reds at Eden Park with five second-half tries to win 53-26 and reinforce their championship credentials. The win moved them seven points clear of the Brumbies and Crusaders after round 13.

"The playoffs ... we'll think about that later on. But right now we just celebrate this one and it's on to the next."

The top four teams at the end of the regular 15-round season will earn a home quarter-final.

The Blues ran in eight tries with Stephen Perofeta bagging one of them while contributing 13 points off the boot.

It was a fourth straight defeat for the Reds, all against New Zealand teams.

"I'll never fault this side for effort, we just got to make sure in those key moments we're executing, which we're not doing at the moment," said Reds skipper Tate McDermott.

In Canberra, the sublime Crusaders prevailed 37-26 to hand the ACT Brumbies only their second defeat of the campaign.

The visitors went to the break with a 25-5 lead and withstood a powerful second-half fightback to secure the win and move level with the Brumbies, behind only the Blues.

Both sides scored four tries with the kicking prowess of All Black Richie Mo'unga making the difference as he nailed four conversions and three penalties.

Brumbies captain Allan Alaalatoa said it was now all about how they bounce back against the Blues next week.

"We obviously know the Blues are in some good form, we've just got to make sure (we improve) with errors and our physicality," he said.

"We've just got to make sure we're clear on those learnings and how we can turn that around."

Elsewhere, the Hurricanes staged a remarkable fightback from 15-0 down at half-time to beat the NSW Waratahs 22-18 in Sydney, with skipper Ardie Savea saving the day with a late try.

It moved them above the Waratahs into fourth place.

Savea said he couldn't repeat what was said at half-time, but it clearly worked.

"The win is very important coming into the back end of the competition," he said.

Western Force's poor form continued with a 61-10 drubbing by the Otago Highlanders in Dunedin, while Fijian Drua came out on top of the first Super Rugby clash between Pacific island sides when they beat Moana Pasifika 34-19.

The powerful islanders have always been an integral part of teams in the southern hemisphere club competition, but this year for the first time have squads of their own.

Both sides have struggled, with the Australia-based Drua winning for only the second time in 12 games while the New Zealand-based Moana Pasifika have lost 10 from 11.

Moana captain and former Wallaby Sekope Kepu said the match was about more than the result.

"Today was a special day, a historic day for Pacific Island people, for Polynesian people," he said.