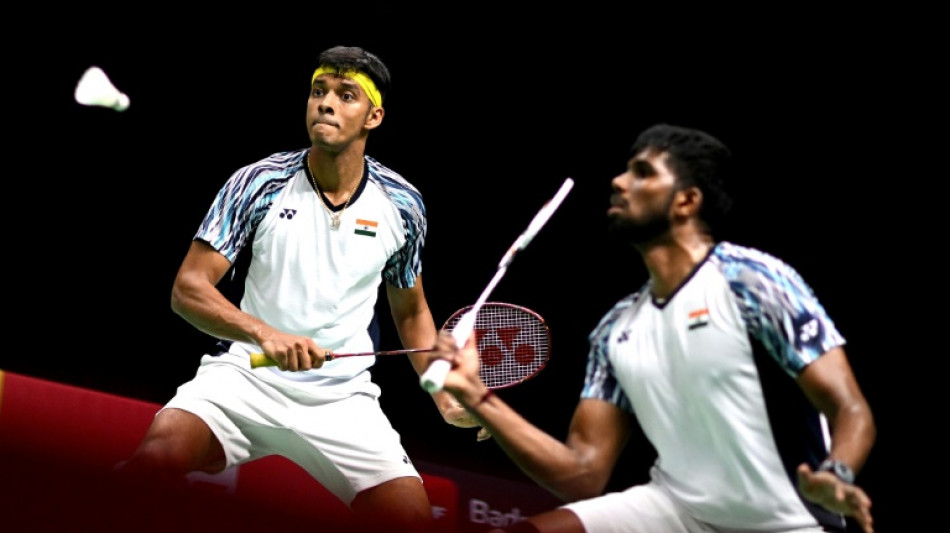 India made history by winning the Thomas Cup for the first time with a ruthless 3-0 upset of reigning champions Indonesia in Bangkok on Sunday.

A devastated Indonesia, the tournament's most successful team having previously won it 14 times, could not keep pace with the fire brought by the Indian team -- who joyfully rushed the court following Srikanth's win.

India were already 2-0 up, with Lakshya Sen beating Anthony Ginting in the first singles match and then Satwiksairaj Rankireddy and Chirag Shetty defeating Mohammad Ahsan and Kevin Sukamuljo in the doubles.

It fell to Christie, an Asian Games gold medallist now in his fourth Thomas Cup campaign, to save Indonesia's flagging title hopes.

But the eighth-ranked Christie couldn't do it and seemed overcome with nerves at the onset of his do-or-die match against Srikanth.

The 29-year-old Srikanth took full advantage, bearing down relentlessly on Christie in the second game.

Srikanth praised his teammates for their performance individually and as a team, noting: "I think everyone really stepped up when it was required."

"A credit goes to the whole team, players, coaches, support team. I love them, they have been fantastic. It's one of the best teams that I have been part of," he said.

"Thomas Cup is something that India has never won and now to be part of a team that won the Thomas Cup and to contribute to the team's win just gives me a lot of happiness," he added.

Srikanth, who told reporters the team's WhatsApp group was called 'it's coming home', said while the team hadn’t got any firm plans for celebrations that evening, "it's definitely going to be crazy".

A dispirited Christie said it wasn't easy coming into his match 2-0 down in the tie, but that he had given his all.

"We already tried our best, I think, and we will try our best the next time," he said.

In the first match of the tie, world number five Ginting grabbed the first game in style over Sen, 21-8.

But he then wobbled, and with Sen growing in confidence, the Indian world number nine won the next two games 21-17, 21-16.

"I think this one is for the team, they have been backing me throughout my performances," the 20-year-old Sen said.

"In the closing stages I was really nervous and trying to calm myself with deep breaths."

Indian Prime Minister Narendra Modi led the praise back home and personally rang the team in the Thai capital to congratulate them.

"The Indian badminton team has scripted history! The entire nation is elated by India winning the Thomas Cup!" he tweeted.

A subdued Ginting admitted there were things he could have improved on.

"I play in a rush today and that's why I make a lot of mistakes," he said.

South Korea sprang an upset of their own in the women's team championship, the Uber Cup, when they defeated holders China in their final on Saturday.