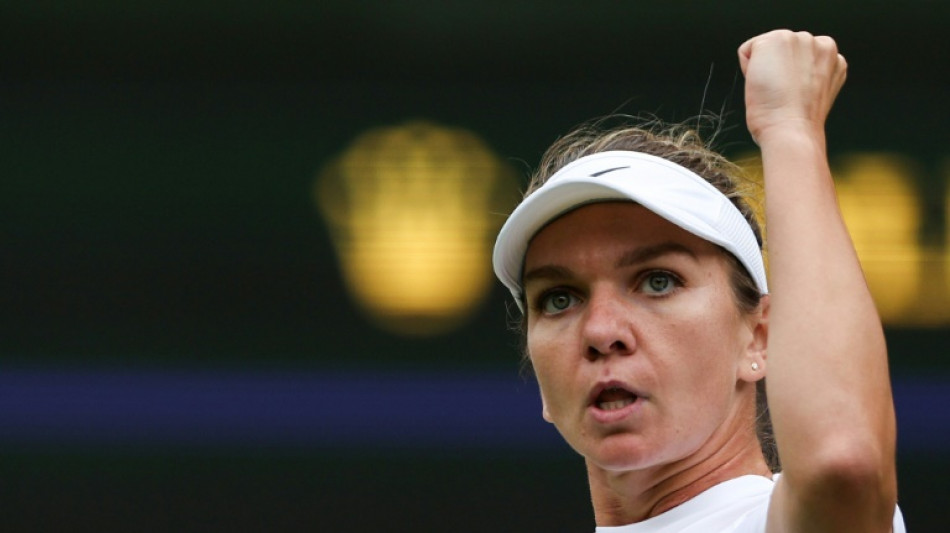 Former champion Simona Halep said she is playing her "best tennis" as she set up a Wimbledon semi-final clash with Kazakhstan's Elena Rybakina on Wednesday.

Halep, the 2019 winner, comfortably reached her third semi-final at the All England Club with a 6-2, 6-4 victory over Amanda Anisimova of the United States.

"Definitely this is my best tennis," said Halep, who missed last year's Wimbledon with a calf injury.

"I am trying to build my confidence back, and it's good."

The Romanian 16th seed, who was also French Open champion in 2018, broke Anisimova's serve four times in the match, wrapping up victory in just over an hour.

"It's great to be back in the semi-finals," said the former world number one. "I'm very emotional right now. It means a lot."

The 30-year-old took charge early in the match on Centre Court, racing into a 5-1 lead and taking the set 6-2.

It was a similar story in the second set, with Halep again dominating and going 5-1 up with a double break.

Anisimova dug deep, earning her own break of serve when Halep served for the match but the Romanian stayed calm to serve out for the win.

"I had to stay strong on my legs -- they helped me today," said Halep, who has not dropped a set at Wimbledon this year.

"I also needed my serve -- everything was good, and it finished well."

Rybakina came from behind to reach her first Grand Slam semi-final, firing 15 aces past Tomljanovic, who had also made the last-eight in 2021.

"It is amazing. I am really happy to be into the semi-final. It was a really tough match," said the 23-year-old Moscow-born player.

"I started a bit slow, I didn't serve that well.

"Maybe I was nervous. She played really well and was defending really good but I just tried to focus on my serve and try to find my way and in the end I found it."

Rybakina switched nationality in 2018. This year Russian and Belarusian players are banned from Wimbledon following the invasion of Ukraine.

Rybakina fired five aces in the first set but her 10 winners were cancelled out by her 10 unforced errors.

The steadier Tomljanovic did not concede a break point while a single break in the third game was enough to hand her the opener.

Back came Moscow-born Rybakina with a triple break in the second set to level the tie.

She swept through the decider and despite being broken when serving for the match in the seventh game, she made no mistake in the ninth with another ace sealing the win.

Halep and Rybakina have met three times so far, with the Romanian holding a 2-1 edge.

Their most recent clash came at the 2021 US Open, when Halep came out on top in three sets in the third round.

"It is a big challenge for me. We have already played a few times and it was a tough battle," said Rybakina.