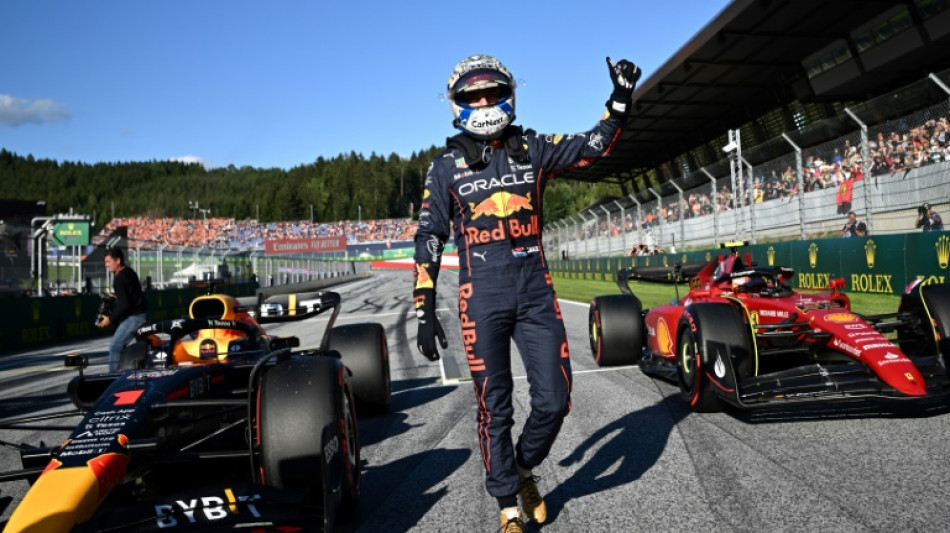 Both Lewis Hamilton and George Russell crashed in the top-10 shoot-out at the Spielberg circuit, owned by Verstappen's Red Bull team.

The world champion who has tens of thousands of Dutch fans supporting him is joined on the front row of Saturday's 100km sprint by the Ferrari of Charles Leclerc.

On the second row are his teammate Carlos Sainz, fresh from his maiden win at Silverstone last weekend, and Sergio Perez in the other Red Bull.

Hamilton made a rare mistake to smash into the barrier at turn seven on a fast lap with five and a half minutes of Q3 left.

He was soon out of his car, walking back to the pits.

"Incredibly disappointed in myself and so sorry to the team who worked so hard to put this car together - I never like to damage it," Hamilton added.

"We were fighting for a top three, I think. I don't have an answer for it."

After a red flag period as the mashed-up Mercedes was lifted off the circuit, the session restarted.

But not for long, as Russell then exited stage left, at turn 10, to leave Mercedes team principal Toto Wolff staring bleakly at his TV monitor.

With eight cars left to battle it out for pole Verstappen took the honours, edging Leclerc by 0.029sec.

"It was a very long wait between the two runs and that's never great. Once you're in the rhythm, it's nice to just keep on going," said Verstappen.

"But of course, very happy with pole; but I also know that tomorrow and Sunday, you can get the points," he added.

Verstappen has a superb record at the track, winning four of the last six including both held at the picturesque circuit in the Styrian mountains in 2021.

Saturday's sprint will shape the grid for Sunday's race, the 11th round of the world championship which Verstappen leads by 34 points from Perez.

Russell had done enough before his exit to post the fifth fastest time with Esteban Ocon (Alpine) in sixth, ahead of Kevin Magnussen and fellow Haas driver Mick Schumacher in seventh and eighth, Fernando Alonso and Hamilton completing the top 10.

This is the middle of three sprints on the 2022 calendar. The first, at the Emilia Romagna Grand Prix weekend, was won by Verstappen who followed up in the race too.

While not an ideal day for Mercedes, the sprint gives them a chance to improve their grid positions for a race they were approaching with optimism after appearing to have at last iron out their car's problems.

"I'm really quite far back. I don't know what is possible from there, but it is a sprint race, so I hope I can make up for some lost time," said Hamilton

On a brighter note he added: "I'm encouraged for sure, I can see our performance; we didn't expect it to be as close as that today, so that's a huge positive."

Leclerc is looking for a change of fortune after seeing his early season title challenge compromised by suspect team tactics.

"I just want to have a clean race. We had five races that were a little bit of a disaster from my side. I just hope that we can finally score the points that we deserve."