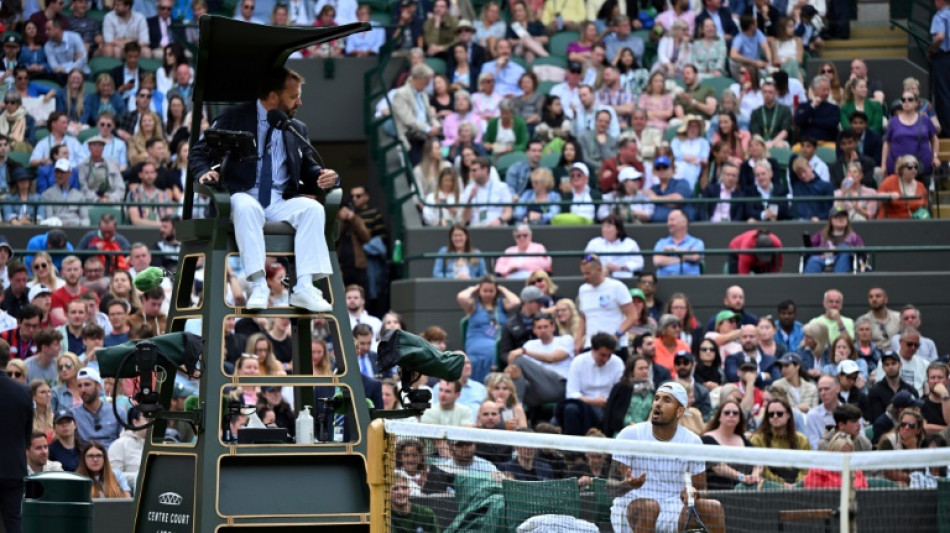 Nick Kyrgios' bad boy image is in many ways a "stage persona", a way of protecting the "sweet, genuine, sensitive person" inside, the player's former manager and agent has told Australian media.

The enigmatic Australian is one of the most polarising figures on the tennis circuit, with his on-court tantrums over a chequered career seeing him slapped with countless fines.

Offences have included lack of effort, racquet-smashing outbursts, abusing umpires, spitting in the direction of fans and throwing a chair onto the court.

So far at Wimbledon, where he will play Novak Djokovic in the final on Sunday, he has racked up $14,000 in penalties after an ugly spat with third-round opponent Stefanos Tsitsipas.

But John Morris, who discovered Kyrgios and spent 10 years as his mentor, said the bluster and bravado wasn't the real Nick.

"He became a caricature of this bad boy image and he played up to it a little bit," Morris told the Sydney Morning Herald on Saturday.

"It wasn't really him. And then you go down a path and, eventually, he just assumes the role.

"Even this week, he is fine playing the role of the villain. It is literally that -- it's a role. In many ways it is a stage persona, but it's a protection tool.

"If he's being short, with his walls up, in his mind he can't get hurt. He's thinking, 'If I don't let conversations go on or if I don't let you in, then I can’t get hurt’.

"I get it. But it's a protection tool. The Nick Kyrgios I knew was a really sweet, genuine, sensitive person."

Morris discovered the now 27-year-old in 2010 and guided him through the highs and lows after he burst onto the scene by beating Rafael Nadal to reach the quarter-finals at Wimbledon as a teenager in 2014.

Even back then, there were controversial moments, like when Kyrgios cut the sleeves off his shirt, contravening the dress code because he wanted to wear a singlet.

Or when he shocked Nike executives by wearing his favourite Nike shirt that was 18 months out of date.

"He wasn't trying to hurt anyone or be edgy. He just didn't understand. He was a kid who had a favourite lucky shirt and it was a big match and he wanted to wear it."

A flawed genius, the combustible Kyrgios' antics have split the tennis world, but Morris denied he could have done more to curb his excesses.

He said much of the discord came down to Kyrgios being unique and not fitting the image of the sport's traditional afficionados.

"I think a lot of people would have tried to curb him and box him," he said.

"That's not what he's about. He needs guiding and I believe we guided him really well. But it always had to be him.

"Yes, you had to drag him in a little bit and put him back on path, but he's so special and so unique in who he is and what he brings to the game."