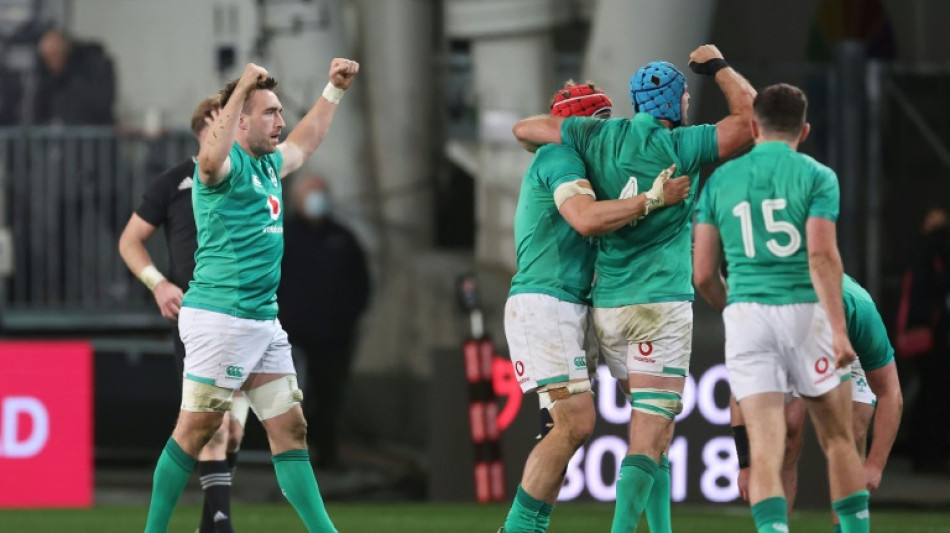 Ireland made history on Saturday by beating the All Blacks on New Zealand soil for the first time with a 23-12 triumph in the second Test in Dunedin.

Prop Andrew Porter was the hero for the visitors, scoring both their tries, while an indisciplined New Zealand played the most of the match with 14 men after a reckless first-half which featured two yellow cards and a red, for replacement prop Angus Ta'avao.

Ireland led 10-7 at the interval and pulled clear after the break to equal their highest winning margin against New Zealand, matching the 11-point victory in Chicago six years ago, their first win in 111 years of trying.

Ireland have won four of their last seven matches against the All Blacks and can secure a rare series win for any nation on New Zealand soil by winning next Saturday's third Test in Wellington.

Reduced to 14 men for 50 minutes, the All Blacks never looked like repeating last week's 42-19 first Test try-fest at Eden Park, crossing through fly-half Beauden Barrett just before halftime and replacement wing Will Jordan near the end.

Porter's tries came at the start of each half, doubling his career tally to four.

Barrett's opposite number Johnny Sexton, cleared to play despite failing a pitchside head injury assessment at Eden Park, had a night to remember.

The Ireland captain landed five from five shots to finish with 13 points and was a controlling figure in a match dominated by the Irish in nearly every facet.

The visitors fixed their set piece problems from Eden Park, kicked cleverly and defended with vigour, allowing them to dominate possession and territory for long periods.

New Zealand's Leicester Fainga'anuku and Ofa Tuungafasi were shown yellow cards for infringements midway through the first half, before Ta'avao was sent off for a high tackle on the half-hour mark.

Peyper deemed the Waikato Chiefs tighthead, fresh on the field in place of Tuungafasi, was too high with his body position when trying to tackle Garry Ringrose.

The outcome was a sickening head clash, which resulted in Ringrose being replaced.

Ireland lock James Ryan was also shown a yellow card late in the first half.