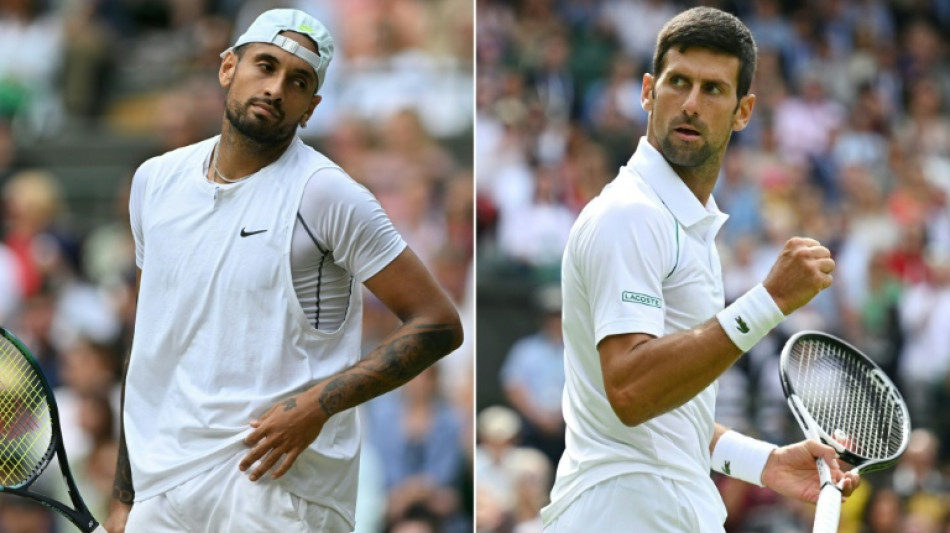 Novak Djokovic and Nick Kyrgios have agreed to meet for dinner after the Wimbledon final on Sunday with the winner footing the bill as their blossoming "bromance" takes off.

The pair meet in a hotly-anticipated showdown at the All England Club with the Serb gunning for a seventh title and the divisive Australian a first.

During an Instagram chat, the two stars, who were once at loggerheads with Kyrgios calling the Serb "a tool", agreed to the wager.

They reportedly met at practice, then took the conversation to social media with Djokovic saying: "It took you five years to say something nice about me", to which Kyrgios responded: "But I defended you when it mattered."

The Serb added: "You did, I appreciate that," to which Kyrgios asked: "We friends now?"

Djokovic then made the offer to meet.

"If you are inviting me for a drink or dinner, I accept. PS winner of tomorrow (Sunday) pays," he said to which the Australian responded: "Deal, let's go to a nightclub and go nuts."

The last comment may have been Kyrgios referencing photos taken at a nightclub in Belgrade in the middle of the Covid pandemic when Djokovic was seen dancing topless.

During that period, the Australian was highly critical of Djokovic for organising his ill-fated Adria Tour, accusing him of "lacking leadership and humility".

Djokovic hit back last year when he said: "Off the court, I don't have much respect for him, to be honest."

However, Kyrgios performed an about-turn by becoming one of the few players to offer Djokovic support in his Australia deportation saga in January, related to his coronavirus vaccination status.

"We definitely have a bit of a bromance now, which is weird," said Kyrgios last week.