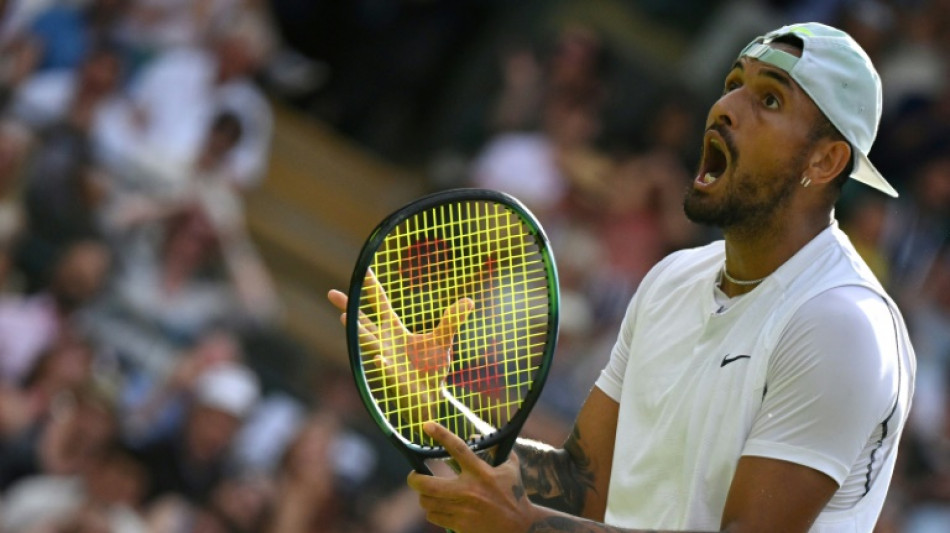 Nick Kyrgios can become one of Wimbledon's most controversial champions on Sunday when he faces Novak Djokovic in a final set to showcase flamboyant shotmaking punctuated by likely dark mood swings.

The maverick Australian crowd-pleaser is in his first Slam final at the age of 27 after a roller-coaster career.

There have been tempestuous outbursts, spats with players, officials and media and fines that he has previously estimated have cost him $500,000.

When Rafael Nadal's injury-enforced withdrawal gave him a free passage into Sunday's final, the Daily Telegraph asked if it represented "Wimbledon's worst nightmare".

Kyrgios, bidding to become Australia's first Grand Slam men's champion since Lleyton Hewitt at Wimbledon 20 years ago, has been box office on and off the court at the All England Club.

In a campaign of all-out attack, he has fired a tournament-leading 120 aces, 292 winners, the second-fastest serve of 137 miles (220 kilometres) per hour while being broken only six times.

But he has picked up $14,000 in fines, spat in the direction of fans and was even accused of having an "evil side" and being a "bully" by third-round rival Stefanos Tsitsipas.

He also has the added distraction of a court appearance in Australia next month, related to an allegation of assault.

"I never thought I'd be here at all, to be brutally honest with you," he said.

Kyrgios, ranked 40, said that, win or lose on Sunday, he has already put his many detractors in their place.

"Since I was born, only eight people have ever won this title. I'm just going to give it my best shot."

The final will be a clash between two men who have rarely seen eye-to-eye.

When Djokovic organised his ill-fated Adria Tour during the coronavirus pandemic, Kyrgios accused him of "lacking leadership and humility".

He once described the Serb's post-match victory celebrations as "cringeworthy".

Djokovic hit back last year when he said: "Off the court, I don't have much respect for him, to be honest."

However, Kyrgios performed an about-turn by becoming one of the few players to offer Djokovic support in his Australia deportation saga in January, related to his Covid vaccination status.

"We definitely have a bit of a bromance now, which is weird," said Kyrgios on Friday.

"We actually message each other on DMs in Instagram now and stuff. Earlier in the week, he was like, 'Hopefully I'll see you Sunday'."

On Saturday, the two exchanged Instagram messages, agreeing to meet for dinner after the final.

Kyrgios knows how to beat Djokovic, winning their only two meetings in 2017 in Acapulco and Indian Wells without dropping a set.

Victory on Sunday would make him only the third unseeded man to lift the trophy after Boris Becker in 1985 and Goran Ivanisevic in 2001.

Djokovic is in his eighth Wimbledon final and record 32nd at all the majors. He has not lost at the tournament since 2017.

He is chasing a seventh title to pull level with Pete Sampras and sit one behind Roger Federer's men's record of eight.

Victory would take him to 21 Grand Slams, one ahead of Federer and one behind Nadal.

Djokovic admits that he has warmed to Kyrgios but stopped short of agreeing they were at the "bromance" level.

"We definitely have a better relationship than what it was probably prior to January this year," said the top seed.

"When it was really tough for me in Australia, he was one of the very few players that came out publicly and supported me and stood by me. That's something I truly appreciate. So I respect him for that a lot."

Djokovic, 35, believes his experience could be crucial against a player whose previous best performance at the Slams were quarter-final runs at Wimbledon in 2014 and the Australian Open the following year.

"But he's a big-match player. The best tennis he's played is always against the top guys. That's why we all respect him, because we know what he can come up with.

"I'm glad that he's in the final because he's got so much talent."