Novak Djokovic by the numbers 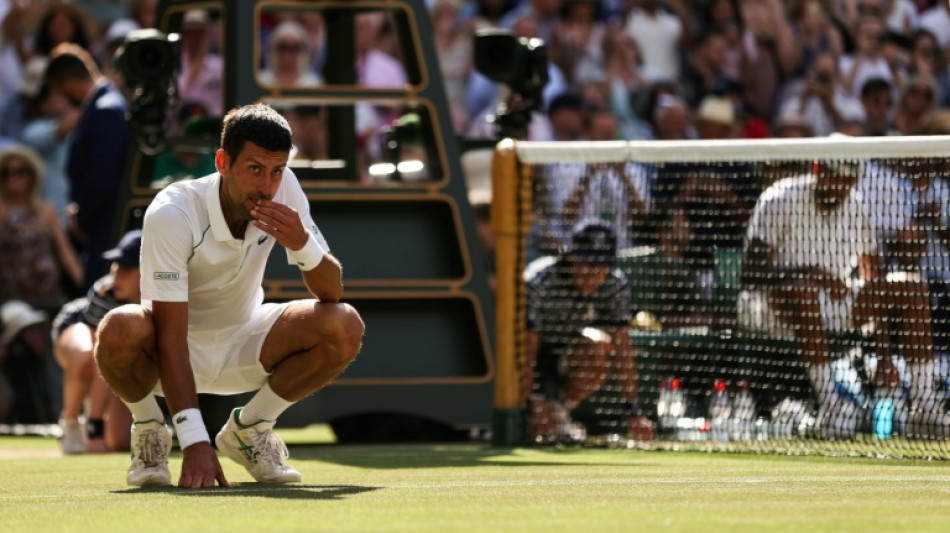 With a seventh Wimbledon title under his belt and a 21st Grand Slam crown, the numbers are stacking up for Novak Djokovic in the race to be the greatest of all time.

AFP Sport looks at the achievements of the 35-year-old Serb star:

-- Record number of weeks as world number one.

Djokovic lost his place on June 13 having been unable to defend his points from the Australian Open and losing points by seeing his French Open title defence ended by Rafael Nadal.

With the ATP and WTA refusing to allocate ranking points at Wimbledon, after Russian and Belarusian players were banned, Djokovic's points earned by winning the 2021 title at the All England Club also dropped off the system.

He woke up on Monday to see his ranking slip from three to seven in the world.

The record for weeks at number one, he has said, was the one closest to his heart and for which he "worked all his life".

-- Number of Grand Slam titles won by Djokovic which is now just one behind the men's record held by Rafael Nadal and one ahead of Roger Federer.

In all, he has won nine Australian Opens (a record), seven at Wimbledon (one behind the men's record of eight held by Federer), three times at the US Open and two at the French Open.

In 2022, however, his refusal to be vaccinated saw him deported from Melbourne on the eve of his Australian Open defence.

His stance on the vaccine will almost certainly prevent him from travelling to New York for the US Open next month.

Djokovic is one of only four men to have won all four majors twice along with Roy Emerson, Rod Laver and Nadal.

He is also only one of three men to have completed a non-calendar Slam along with Donald Budge and Laver by winning Wimbledon and the US Open in 2015 and then capturing the Australian and French Opens in 2016.

With Pete Sampras, Bjorn Borg and Federer, he has won four consecutive Wimbledons.

-- Match wins at Wimbledon. Federer holds the record of 105.

-- Match wins at Grand Slams. Federer leads the list with 369.

-- Number of finals played at Wimbledon. Only Federer, with 12, has played more.

-- Number of career tournaments won by Djokovic. Federer has 103, Nadal has won 92 but Jimmy Connors is the record holder with 109.

-- Match wins overall on the professional circuit. Connors remains a long way ahead on 1,274.

-- Record for year-end world number one ranking. Pete Sampras finished with six while Federer and Nadal have five apiece.

-- Record number of Masters titles won by Djokovic who is also the only player to have won each of the nine Masters events on more than one occasion.

-- Number of year-ending ATP Finals titles. Only Federer has more with six.