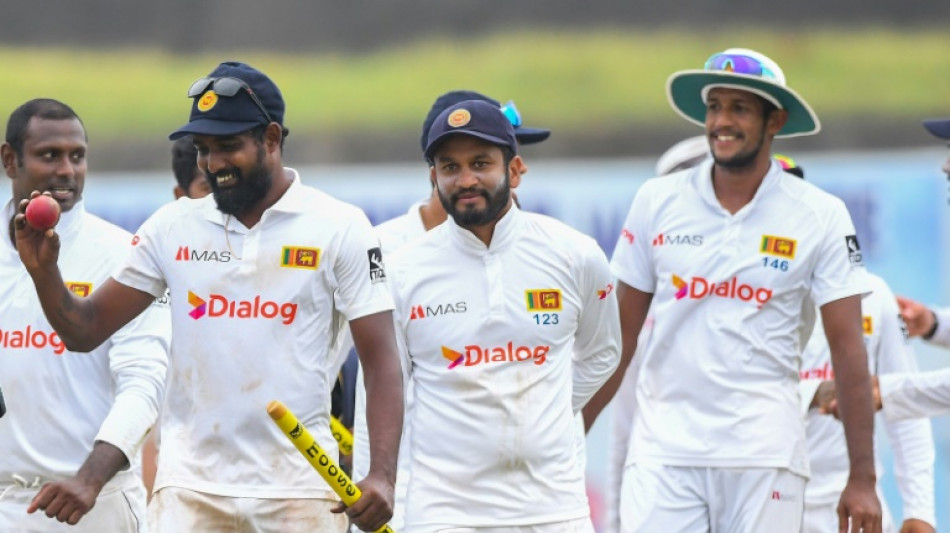 Sri Lanka bounced back from an opening defeat inside three days to thrash Australia in the second Test by an innings and 39 runs and level the series 1-1 on Monday.

The sound of bat on ball and the home team posting a famous victory in the second Test put a smile back on the face of cricket-crazy Sri Lanka during the country's political turmoil.

In the space of two days at the Galle stadium the sound of protesters demanding the resignation of President Gotabya Rajapaksa turned to drums and applause on Monday when double-centurion Dinesh Chandimal led the team's victory lap, as players took selfies with jubilant fans.

Australia skipper Pat Cummins said: "We got lots of messages from back home, just saying, 'How is it, hope you're OK?' and we felt totally fine.

"But you could hear when it changed from protests into a party."

From a vicious turner in the opener, the pitch at Galle witnessed batsmen take advantage of a flatter pitch in the second Test, with Australia's Steve Smith hitting an unbeaten 145 and Sri Lanka's Chandimal ending 206 not out.

Sri Lanka lost the first match in just over two days after they were bundled out for 212 and 113.

The pitch doctors then provided a vastly different track at the same venue that Sri Lanka exploited to secure the victory and was called a "good surface" by the rival captain.

Sri Lanka are yet to find another spin-bowling great like Muttiah Muralitharan or Rangana Herath, but the series proved their spin reserves run deep.

The team suffered a Covid outbreak on the eve of the second Test, forcing them to hand debuts to off-break bowler Maheesh Theekshana and a relatively unknown left-arm spinner Prabhat Jayasuriya.

Jayasuriya, 30, turned out to be a late bloomer as he took a match haul of 12 wickets with Chandimal saying he knew from the start of the match "Prabhat would be the key".

Australia's Nathan Lyon had been no match on his last tour in 2016 for Herath, who took 28 wickets to help inflict a 3-0 Test whitewash on the tourists.

But Lyon, 34, returned as an experienced off-spinner to lead his team's charge with a match haul of nine wickets in a crushing opening win.

In the second match, Lyon toiled for 64 overs for two wickets, with captain Cummins saying he "hardly bowled a bad ball".

But his 11 dismissals in the series did take Lyon to 10th place in the all-time among Test bowling list after finishing the series on 438 wickets, four more than India great Kapil Dev and five head of Herath's 433.

Sri Lankans were surprised in the opening Test when Australians such as Cameron Green and Alex Carey, on their first tour to the island nation, used the sweep shot to good effect against the spinners.

Green top-scored with 77 and Carey made 45 in a powerful display of batting in extreme sub-continental conditions that won praise from the hosts.

The hosts did learn their lessons come the second game but sweep shots were sparingly used on what turned out to be more of a batting wicket.