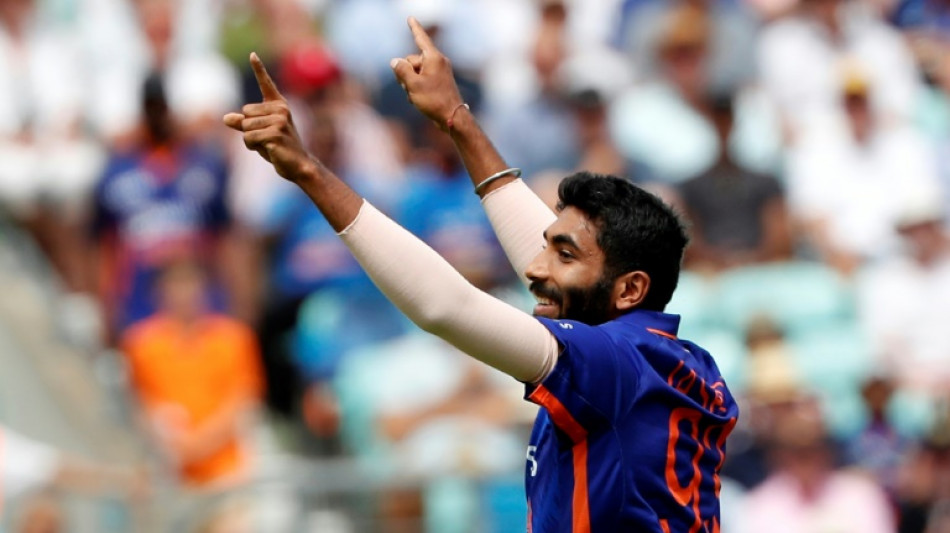 Jasprit Bumrah routed the top order as India thrashed 50-over world champions England by 10 wickets in the first one-day international at the Oval on Tuesday.

India captain Rohit Sharma, who won a good toss, then made an unbeaten 76 before Shikhar Dhawan (31 not out) cut Brydon Carse for four as the tourists finished on 114-0 with more than 31 overs to spare.

Victory gave 2023 World Cup hosts India a 1-0 lead in a three-match series that continues on the other side of London's River Thames at Lord's on Thursday.

Bumrah produced an opening burst of 4-9 in five overs against an England side featuring arguably their strongest batting line-up at this level since their 2019 World Cup final triumph.

England avoided the embarrassment of being dismissed for less than their record low completed ODI score of 86 all out against Australia at Old Trafford in 2001.

But an innings featuring four ducks in the tops six -- Jason Roy, Joe Root, Ben Stokes and Liam Livingstone were all out for nought -- saw England bowled out with nearly half of their 50 overs remaining.

Bumrah, 28 returned to clean up Brydon Carse and David Willey to surpass his only other five-wicket haul of his 71 match ODI career -- 5-27 against Sri Lanka at Pallekelle five years ago.

Mohammed Shami, Bumrah's new-ball partner, took 3-31 in seven overs as he became the fastest Indian and joint-third fastest to 150 ODI wickets in matches played in his 80th appearance.

Overcast skies and a well-grassed pitch favoured the faster bowlers, but it was still a superb display by India's new-ball duo.

The tone was set when Roy, on his Surrey home ground, played on trying to drive Bumrah's fourth ball of the day.

Two balls later, Root -- the world's top-ranked Test batsman -- was undone by a Bumrah delivery that lifted off a good length.

And in the next over Test captain Stokes fell for a golden duck when he inside-edged an intended drive off Shami and was brilliantly caught by diving wicketkeeper Rishabh Pant.

Jonny Bairstow, fresh from two hundreds in England's seven-wicket win in the Covid-delayed fifth Test against India at Edgbaston, then fell for seven, edging an excellent Bumrah delivery to Pant, who held a diving right-handed catch.

Bairstow, Root and Stokes all missed the recent T20 series which India won 2-1.

This was the first time the star trio had played a 50-over international together since England's World Cup final win over New Zealand at Lord's three years ago.

They managed just seven runs between them.

England were 26-5 in the eighth over when Livingstone, walking across his crease, was clean bowled leg-stump by Bumrah.

Buttler tried to turn the tide, hitting six fours in 32 balls faced, only to hoist Shami to deep square leg, where Suryakumar Yadav held a well-judged catch just inside the rope.

No. 11 Reece Topley hit England's first, and only, six with a well-struck drive off leg-spinner Yuzvendra Chahal but two balls later the innings was over when Bumrah bowled Willey with a thunderbolt yorker.

Rohit was quickly into his stride, hitting legside sixes off Willey and Craig Overton. He also hooked Carse for six to complete a 49-ball fifty featuring six fours.