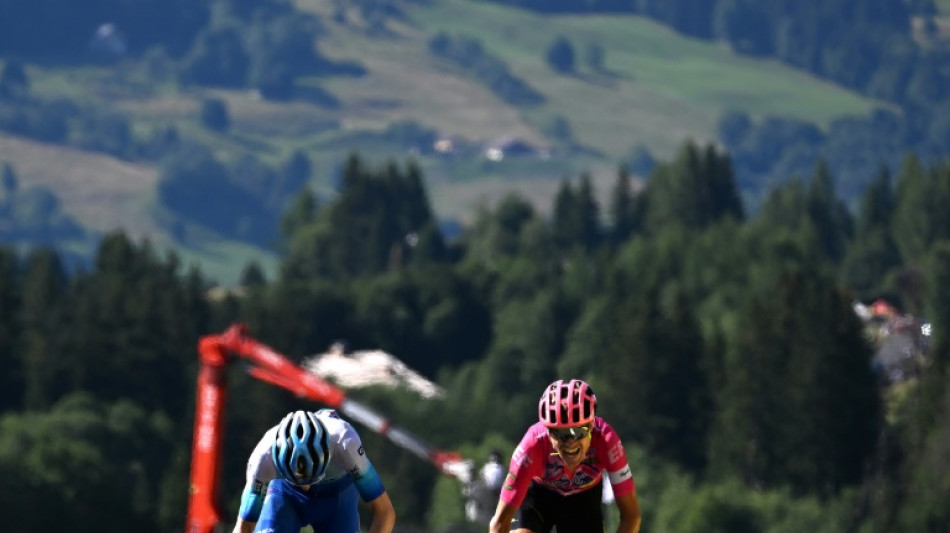 Magnus Cort Nielsen won stage 10 of the Tour de France on Tuesday, after a nail-biting cat-and-mouse struggle up the final section of the culminating 20km climb.

Nick Schultz of Bike Exchange was second and Luis Leon Sanchez of Bahrain third after a 148km run along sinuous Haut Savoie roads that avoided the major mountains but could not escape a 15-minute interruption when protestors blocked the road.

Nielsen, a Dane who rides for EF, wore the polka dot mountain points jersey for several days early in the race and the rolling hills here suited his style.

"It was a perfect day in the end," said the two-time defending champion, despite what must have been a tense morning with the covid tests in his team.

Asked if he shared Pogacar's feelings Nielsen, smiling broadly beneath his handlebar moustache said: "It would have been a perfect day if tomorrow were a rest day."

"But really, what could be better," said the Dane, sweating from winning his four-way battle for the stage.

German Lennard Kamna leapt from 21st to second after escaping with the breakaway. Although he could not keep up on the final climb, the Bora rider still gained more than eight minutes on the race leaders and is just 11sec adrift of Pogacar.

Had Kamna been 12 seconds faster Pogacar would have given up both the yellow and the white jersey.

"Even when he tries to lose the yellow jersey, he can't," joked French rider Romain Bardet, who is in seventh.

Pogacar earlier lost a second teammate to Covid, while his key lieutenant Rafal Majka also tested positive but was cleared to race by the UCI as he is considered not infectious.

School-holiday crowds, mainly families, were in party mode along the sinuous route, and even more are expected on the two huge mountain stages coming up.

A day after the rest day, the cyclists rode through bright sunshine and 24C temperatures as the winding 148km through the valleys of the Haute Savoie skirted the major climbs.

The ride was delayed twice.

The first delay came when a team bus became stuck on a hairpin bend before the start and had to be lifted out by snowplough.

Then the racing was interrupted by nine protestors from a French climate activist group, who sat across the road and lit flares with 38km left. They were dragged to the verge by gendarmes and then arrested.

Wednesday's 151km run from Albertville to Col du Granon features two beyond category climbs is considered by some of the contenders, including fourth-placed Geraint Thomas of Ineos,as the toughest in this year's visit to the Alps.

The final climb rises to 2,400 meters while the Col du Galibier before it climbs to 2600.

"I'm comfortable with those kinds of altitudes," Thomas, the 2018 champion, said on Monday.

On the July 14, Bastille Day, on Thursday the race returns over some of the same mountains but takes in three beyond category climbs before finishing at the Alpe d'Huez where crowds are traditionally less family based and an atmosphere of anarchy can reign.