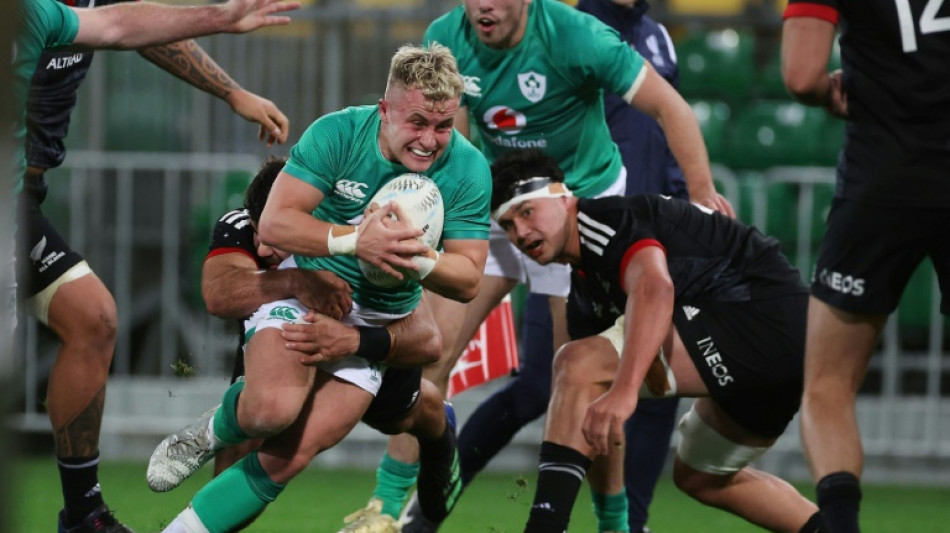 History-chasing Ireland out to cause 'chaos' in All Blacks series decider / Foto: © AFP

Coach Andy Farrell said on Friday Ireland will be intent on creating "chaos" with the All Blacks game plan once again as they seek to become the first team in 28 years to notch a series win on New Zealand soil.

Victory in Saturday's third and deciding Test in Wellington will hand the tourists a 2-1 triumph, the first for any side in New Zealand since the French prevailed 2-0 in 1994 -- and just the sixth occasion in history.

The scenario seemed beyond Farrell's men when they were struck down by early-tour injuries and were overrun 42-19 in the first Test at Eden Park.

However, a calm response and precise planning were behind a 34-point swing as Ireland won the second Test 23-12 in Dunedin, dismantling the lacklustre hosts in emphatic style.

Farrell is certain the All Blacks will respond with ferocity but he wants a different outcome to the pattern of the last six years -- in which each of Ireland's four wins over New Zealand has been followed immediately by a loss.

"We know what the history says about all that so this is exactly where we want to be," he said.

"They'll be hurting, we know that they bounce back unbelievably strong, we've played them enough times now to realise what's coming.

New Zealand have failed to win just five of their last 40 home series dating back 50 years.

Comparisons between that Lions tour -- when Farrell was an assistant coach to Warren Gatland -- and Ireland's current campaign are compelling.

On both occasions the All Blacks comfortably won the first Test before squandering the second on the back of having a player sent off.

It was Sonny Bill Williams five years ago, while Angus Ta'avao got his marching orders after 30 minutes in Dunedin.

All Blacks coach Ian Foster said discipline would be critical in a Test refereed by Englishman Wayne Barnes but they also can't afford to retreat into their shell.

"The first Test showed that when we've got 15 on 15 we've got some good answers at the moment," Foster said.

"It's a tough week after a loss and, like always, we're trying to be pretty demanding and ruthless about how we assess the game. We've just got to believe in what we're doing."

Farrell acknowledged his team were near the end of another marathon season but didn't feel weary legs would be problematic.

He believed the players will be motivated by the knowledge this could be Ireland's last bilateral series for some time, with World Rugby set to launch its new global competition next year comprising only one-off Tests.

"It's like gold dust isn't it? A deciding game in New Zealand, with a sniff of trying to win a series," Farrell said.

"The biggest thing we can say about that is that it will probably never be done again by an Irish side, for what we know is probably going to happen in the future.

"If that's not big enough in its own right, I don't know what is. It's the chance of a lifetime."