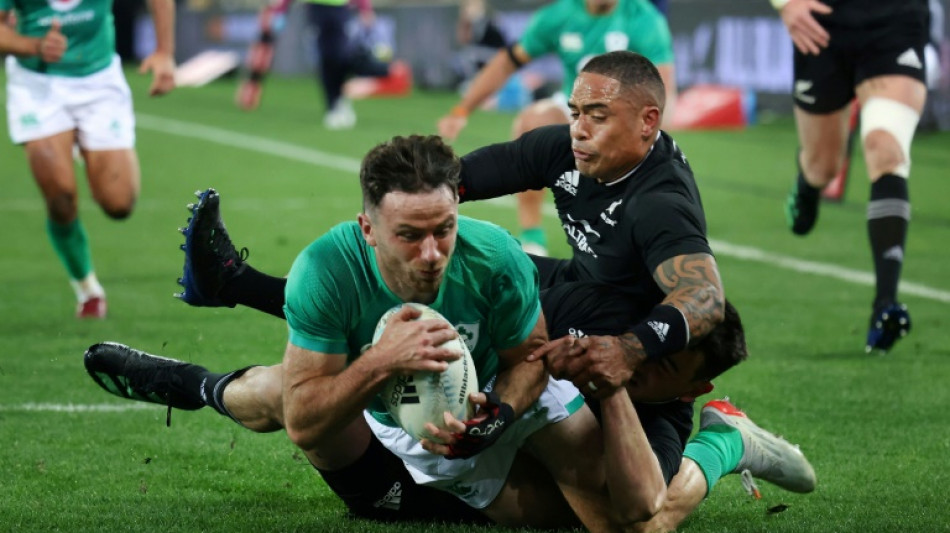 Ireland made history on Saturday as they held off the fast-finishing All Blacks to win the deciding third Test 32-22, becoming the first touring team in the professional era to win a series on New Zealand soil.

Ireland scored three tries before half-time in Wellington to lead 22-3 and held their nerve as New Zealand stormed back with three of their own after the interval to clinch the series 2-1.

It completed just the sixth-ever series win by a visiting team in New Zealand and the first since France prevailed 2-0 in 1994.

The victory -- Ireland's fifth in their last eight meetings with the All Blacks -- establishes Andy Farrell's team as among the leading contenders to win next year's World Cup in France.

"Our fans turned out tonight, but also four million people back at home for breakfast, probably having a couple of pints watching us," said Ireland captain Johnny Sexton.

"We wanted to do them proud and we certainly did that. The effort was incredible and it's a very special day because we're playing against the best in the world, the very best, and to come down here and do it is very special."

It leaves New Zealand coach Ian Foster under enormous pressure with his side having lost four of their last five Tests.

The All Blacks have rarely been so outplayed as they were in the first half, failing to respond to a merciless Ireland side who took their chances ruthlessly.

Having looked muddled in attack and clueless on defence for 40 minutes, New Zealand mounted a rearguard after half-time, storming back to trail 25-22 entering the final quarter of the match.

But they couldn't push on against a visiting side who created breathing room when Rob Herring crossed for their fourth try and held firm to complete one of the great series rebounds.

Ireland lost the first Test 42-19 at Eden Park two weeks ago before rebounding to win the second Test 23-12 in Dunedin.

"It hasn't quite sunk in," said Ireland wing James Lowe. "We knew after the first Test that wasn't our best performance, but we tidied things up and tried to stop New Zealand.

"Results like that, on the bounce, in New Zealand, who'd have thought?"