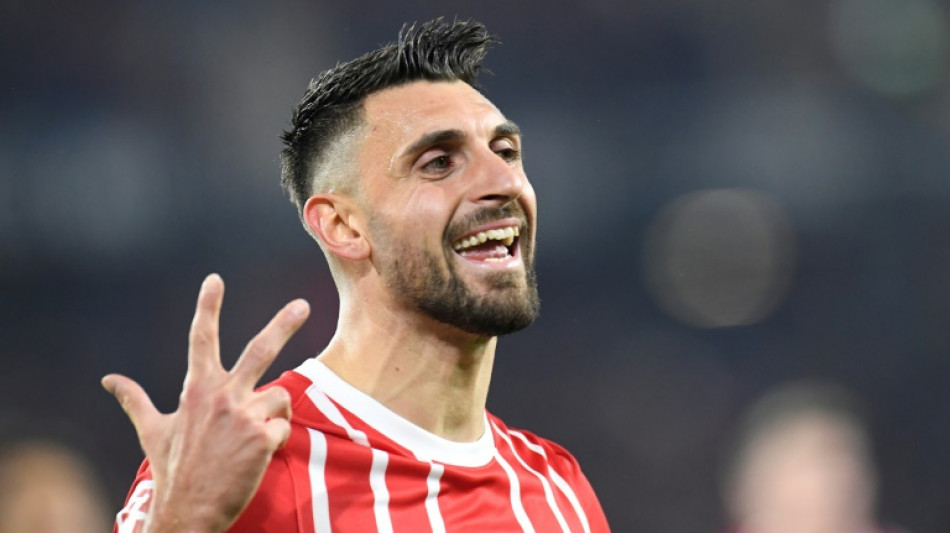 Freiburg midfielder Vincenzo Grifo hit three goals in the first 20 minutes as his side thrashed a 10-man Union Berlin 4-1 at home to go outright second on the Bundesliga ladder.

Union, who unexpectedly led the Bundesliga for almost two months, have now been well beaten twice in one week, after last Sunday's 5-0 thrashing at Bayer Leverkusen.

Freiburg received a penalty for handball after three minutes, with free-kick specialist Grifo stepping up to smash the ball home for his seventh goal of the season.

Union had a chance to crawl back into the match three minutes later when they were awarded a penalty but defender Robin Knoche hit the post.

The game's furious opening continued when Freiburg were awarded another penalty less than 10 minutes later, when Diogo Leite brought down Ritsu Doan in the box.

Leite was shown a red card and Grifo stepped up to complete his hat-trick in the 20th minute.

Austrian forward Michael Gregoritsch added another for Freiburg in first-half injury time, chipping a Doan assist over Union keeper Lennart Grill and into the back of the net.

Freiburg went into cruise control in the second half, while Union looked to prevent more damage. There were few scoring chances until Berlin received a late penalty - the fourth of the match - with Sven Michel converting.

Freiburg will go through the winter break sitting four points behind Bayern Munich in second place, but manager Christian Streich rejected the temptation to get excited.

"There will be other times too. We will also lose two or three games again."

Union's unlikely rise to the top of the table was built on stoic defence, with the club conceding only nine times in their opening 12 games.

However, they have now conceded 11 goals in their past three matches and will heartily welcome the winter break.

"You have trouble understanding it. We made it too easy for Freiburg."

The hosts took the lead after 40 minutes when German striker Jonathan Burkardt slammed in a loose ball after a save from Frankfurt's Qatar-bound 'keeper Kevin Trapp.

The opening goal kicked off a dominant period for Mainz who forced several acrobatic saves from Trapp.

Frankfurt, who have won seven of their past eight games, hit back after 67 minutes, when a superb flicked assist from German forward Mario Goetze found its way to Kolo Muani, who slammed the ball home.

The French forward now has six goals in his past nine games, to go with his league-high nine assists this season.

Goetze, who was called up this week to the Germany squad for the Qatar World Cup after a five-year absence, had a chance to give Frankfurt a win when put into space by Kolo Muani in front of goal after 81 minutes, but Mainz held firm, snapping a three-game losing streak.