Deutsche Tageszeitung - Erasmus needs to be reined in over referee criticism: Gatland

Erasmus needs to be reined in over referee criticism: Gatland 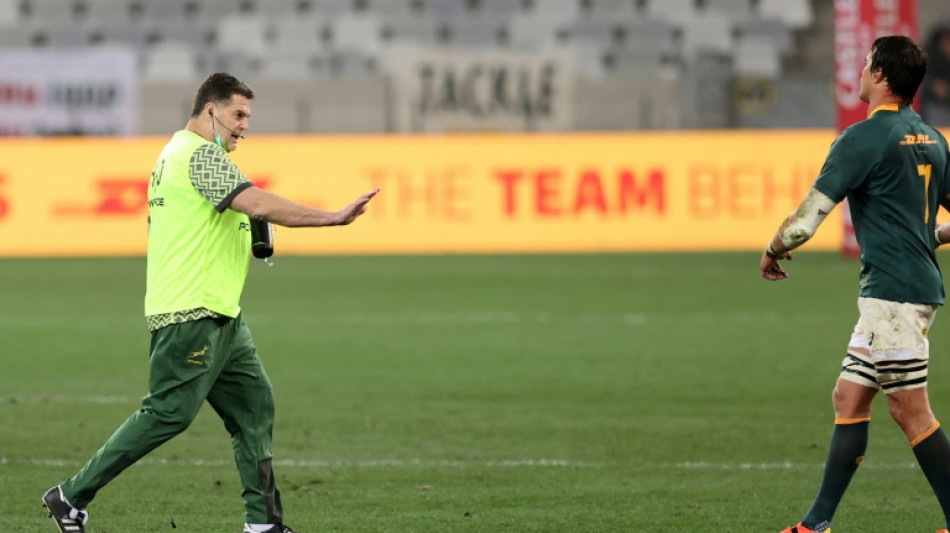 Erasmus needs to be reined in over referee criticism: Gatland / Foto: © AFP

Erasmus has only just returned from a stadium ban following a World Rugby suspension for his infamous hour-long video criticising referee Nic Berry's performance in the first Test between the Springboks and the British and Irish Lions last year.

That did not stop Erasmus from publishing several videos on social media on Sunday and Monday that appeared to question decisions made by referee Wayne Barnes during the Springboks' 30-26 loss to France last Saturday.

Gatland was head coach of the Lions on that ill-tempered tour and he wrote in his column for Wednesday's UK Daily Telegraph that Erasmus was out of line.

"You would like to think that someone will pull Erasmus aside," said the 59-year-old New Zealander.

"Whether it's someone from the South African Rugby Union or their CEO or there's a phone call, to tell Rassie: 'I don't think you're doing yourself any favours, or World Rugby any favours by putting these things out on social media'.

"Let the public do that and go through the right processes."

Erasmus -- who became a national hero when he coached the Springboks to the 2019 World Cup trophy -- denied on Tuesday he was criticising Barnes.

He said he was pointing out weaknesses in the team's display that require correcting if they are to record their first win of the Autumn Nations Series against Italy on Saturday.

"It's not having a go at the referee...It's obviously something on our side that we have to fix," the 50-year-old said.

"I think South African supporters would like to understand that, but if people put a narrative to that, that I can't control unfortunately."

Gatland, though, did not buy that argument.

"I can't particularly see a defence there for what he's doing," said Gatland.

"I don't think it's a great look for the game. We should adhere to the process.

"The last thing we need is coaches taking this into the media and making comments about the game."

The implied criticism of English referee Barnes, who surpassed Owens's record by controlling his 101st Test match last weekend, did not go down well with the retired Welsh official.

"I saw these come up and I was thinking 'is this his genuine profile? Is he doing this?'", Owens told the Daily Telegraph's rugby podcast on Tuesday.

"To me, we don't need that in the game and I'd have thought he'd have learned his lesson by now."