France sweat on Benzema, Varane ahead of World Cup opener 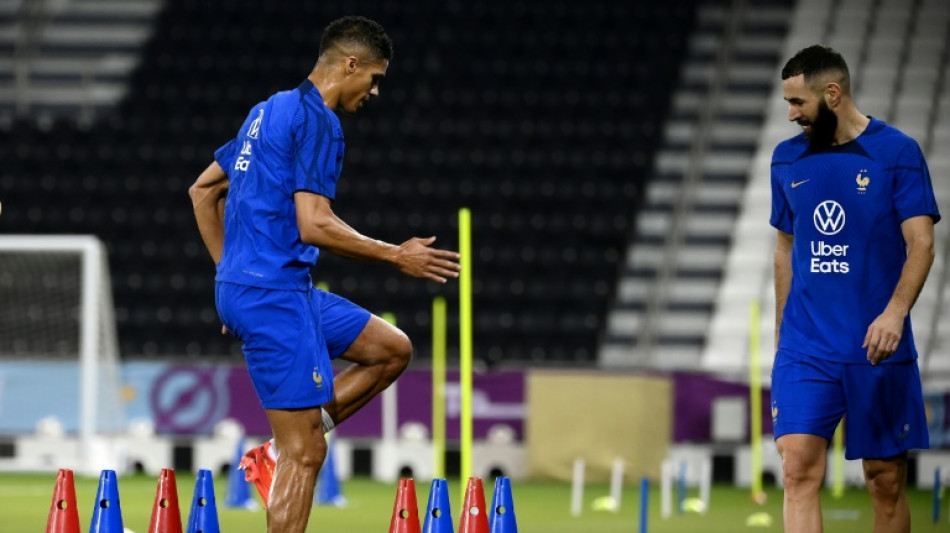 Defending champions France are hoping Karim Benzema and Raphael Varane will be fit enough to feature in their opening World Cup match against Australia, with teammate Adrien Rabiot insisting both are "determined to play".

Benzema has been struggling with a thigh problem while Varane is recovering from a leg injury.

Both players trained apart from the rest of the France squad during a session open to the media at the home stadium of Qatari champions Al Sadd on Thursday evening.

"Karim and Raphael are doing really well," Rabiot said on Friday. "They trained apart because that was the protocol that was in place for them.

"They are good and are really keen to play, but I don't know if they will be involved in the first match."

Real Madrid striker Benzema, who last month won the Ballon d'Or, played less than half an hour of football in his club's last six games before the World Cup.

Manchester United centre-back Varane has not played a game since coming off in tears against Chelsea on October 22.

The 34-year-old Benzema's lack of recent match practice means Olivier Giroud could come into the side when France begin the defence of their trophy against the Australians in Al Wakrah next Tuesday.

"It is clear that it is better when you are playing and putting games together but I think Karim's case is different," said Rabiot.

"It is less of a handicap for a striker than for a midfielder, and he is a top-level player who knows how to handle himself.

"I think it's more down to how he is feeling personally. But if he is not there for the first match he will be there for the second."

France, who are already without key midfield pair Paul Pogba and N'Golo Kante in Qatar due to injury, will also play Denmark and Tunisia in Group D.

Juventus midfielder Rabiot is set to profit from the absence of Pogba and Kante and play a central role in Didier Deschamps' side.

Four years ago he missed out on a place in the victorious 2018 World Cup squad and refused to be included on a standby list.

"Four years have passed since 2018," said the 27-year-old. "It is true that it was a major disappointment and I have worked really hard to be here this time.

"I am grateful for all that has happened since my return to the team."