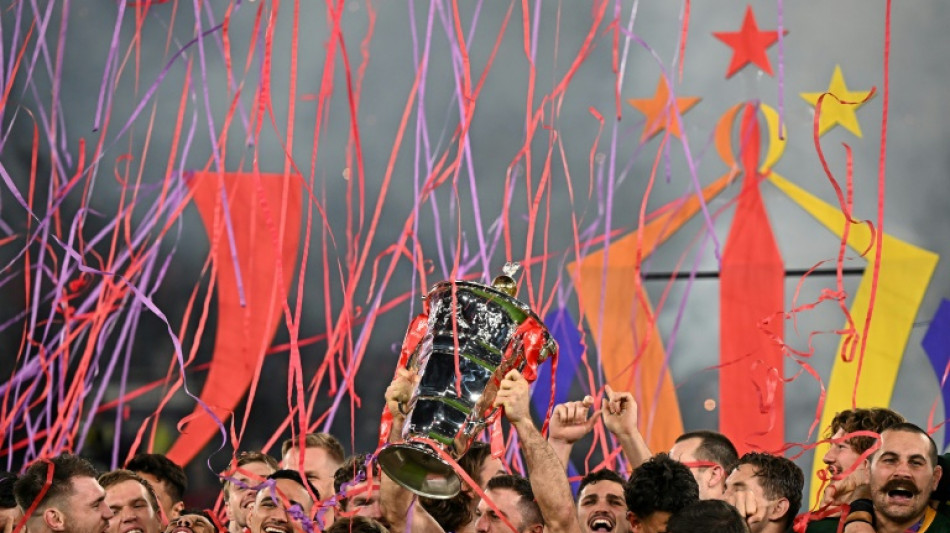 Skipper James Tedesco and Latrell Mitchell each scored a brace of tries, Liam Martin and Cameron Murray also crossing, with Nathan Cleary kicking three conversions in a victory that never looked in doubt.

Much to the delight of the partisan 67,502 crowd at Manchester United's home ground, Samoa's Brian To'o got one back for the Pacific Islanders, converted by Stephen Crichton, the centre also grabbing a try of his own.

"The first half was exceptional, we did what we needed to do," Meninga said, with his team racing out to a 14-0 half-time lead.

"In the second half we scrambled well, a man down but we still scored points. It's what you do, you work for each other.

"We brought our best game tonight. We've had a long year but have been rewarded for effort tonight. What a way to finish our 2022 season.

"I'm really happy with the end result for us. It's been a tough, arduous year with the NRL and State of Origin so to come out and produce that effort, that was tremendous," he said, with the Kangaroos having conceded just eight tries for 52 scored over the tournament.

Samoa coach Matt Parish believed the yellow card handed to Kangaroos lock Angus Crichton for a leading elbow to the face of Samoa's Chanel Harris-Tavita -- which left him out cold -- should have been red.

"Five minutes into the second our hooker gets elbowed in the head and gets carted off, the referee makes a weak decision and puts him in the bin, I'm dumbfounded," Parish said.

Meninga, however, played down the non-severity of the decision by referee Ashley Klein.

"My view is that he should have stayed on the field, that's just silly," the Australian said.

Turning to the international calendar, long a thorn in the side for for the global development of rugby league, Meninga was keen to see the International Rugby League come up with some dates for touring.

"I'm coach of the World Cup winners and like I've said many times, particularly the last few days, where to from now?" he said, hailing the World Cup as a fine insight into the power of the 13-a-side rugby code.

"We're looking forward to the decision makers making the next decision about where we go to.

"We need a schedule discussed and to work towards. We can only deal with the cards you're dealt with.

"The IRL are going to sit down before the end of the year, that's what I gather from this, so hopefully they do that and we have some sort of schedule sorted for the beginning of next year."

Samoa's Parish called the final result "disappointing, but not the effort or commitment of the guys".

"We probably never got really close enough to put any pressure on them.

"We didn't take our chances as we should have. We needed a lot of things to go right for us today. We were down to 19 players, that's all we had left... just so courageous and they're a great team."

Samoa skipper Junior Paulo admitted to feeling a bit of "FOMO", or fear of missing out, on the parades throughout not just in Samoa but also among the Samoan diaspora in western Sydney, New Zealand and the United States in support of the Pacific Islanders.

"It's about being able to inspire not just the youth but the next generation coming through," said the prop, one of several players in the Samoa team to have opted to represent a country of heritage rather than traditional powerhouses Australia and New Zealand.

"We can unite this beautiful nation that we get to call home."