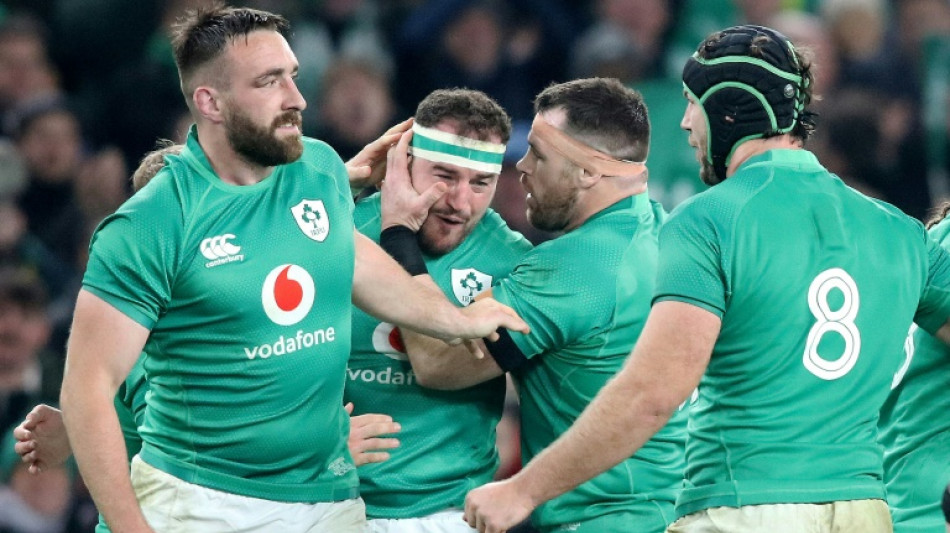 Ireland will go into Rugby World Cup year ranked number one in the world after edging Australia 13-10 at Lansdowne Road on Saturday.

The Irish are the first team since England in 2002 to beat the All Blacks, South Africa and Australia in the same year -- and the year the English did it, they went on to lift the World Cup in 2003.

Ireland, though, are yet to reach even the semi-finals and with world champions South Africa and unpredictable Scotland in their pool in France next year they face a tough task to qualify for the knockout stages.

Australia slid to their third successive defeat in the Autumn Nations Series including a historic loss to Italy.

AFP Sport picks out three things the two sides can take from the match:

Ireland head coach Andy Farrell admits that his side will enter 2023 with "a lot to do, which is great."

Farrell spoke of Ireland's "guts, character and resilience" and in Josh van der Flier, Caelan Doris and the veteran Peter O'Mahony he has three backrow forwards who typify that.

Doris it was who secured a crucial turnover on Saturday after the Wallabies had gone through 26 phases of play and were close to the Irish tryline in the first-half.

Such plays energize a team and although they did concede a try in the second half the defence once again came to their aid as the clock ticked down.

They twice forced errors from the Australians, including a Wallaby line-out metres from their tryline.

"For us to back up a few ill-disciplined bits and a few errors technically, tactically and still find a way (of winning) is a hallmark of a good side," said Farrell.

"That's what all good sides do, you always find a way in the heat of the battle."

Sexton remains the heartbeat of the Irish

Farrell and the team could take heart too that they won a match against a fellow Tier One side without their talisman Johnny Sexton.

Sexton was a late withdrawal due to a calf injury and with his deputy Joey Carbery missing through concussion, the latter's understudy at Munster, 22-year-old Jack Crowley, dealt pretty well with the pressure in only his second Test.

A late withdrawal due to a calf injury and missing through concussion his deputy Joey Carbery, the latter's understudy at Munster 22-year-old Jack Crowley dealt with the pressure pretty well in only his second Test.

It was Sexton's number two at Leinster, Ross Byrne, who took the plaudits though, for coming on and knocking over what turned out to be the penalty that separated the sides.

"It's what you dream of. They're the moments as a kid that you want," said Byrne, who had not played in a Test since March 2021.

However, Ireland's conundrum remains the same as it has been ever since Sexton took over the mantle of number one from Ronan O'Gara a decade ago -- no-one makes the Irish tick like he does.

The lacklustre performance on Saturday reflected his absence -- his legs may not have the speed they once had but his vision, his drive and just his mere presence galvanises his team-mates.

He would be the first to say there is no 'I' in team but if Ireland are to break through their World Cup glass ceiling then they face a nervy few months praying Sexton gets there fit.

Youth and experience give Aussies hope

Dave Rennie's Wallabies head to the final match of their tour against Wales on the back of three successive defeats.

However, though some say results do not lie there is some comfort to be drawn.

Their first-choice side lost to Six Nations Grand Slam champions France by a point and had they taken their chances might well have beaten the Irish.

"We played a lot of good footy tonight but not a lot of reward," said Rennie.

Rennie can take heart too that there are some young players emerging like wing Mark Nawaqanitawase.

Nawaqanitawase and his fellow 22-year-old Jordan Petaia -- who has more experience at Test level -- mixed with veterans Bernard Foley, James Slipper and Michael Hooper could make the Wallabies the dark horses of the World Cup.

Rennie can be heartened too by past history.

Michael Cheika's Wallabies lost three Tests in the northern hemisphere in 2014 but a year later they reached the World Cup final.