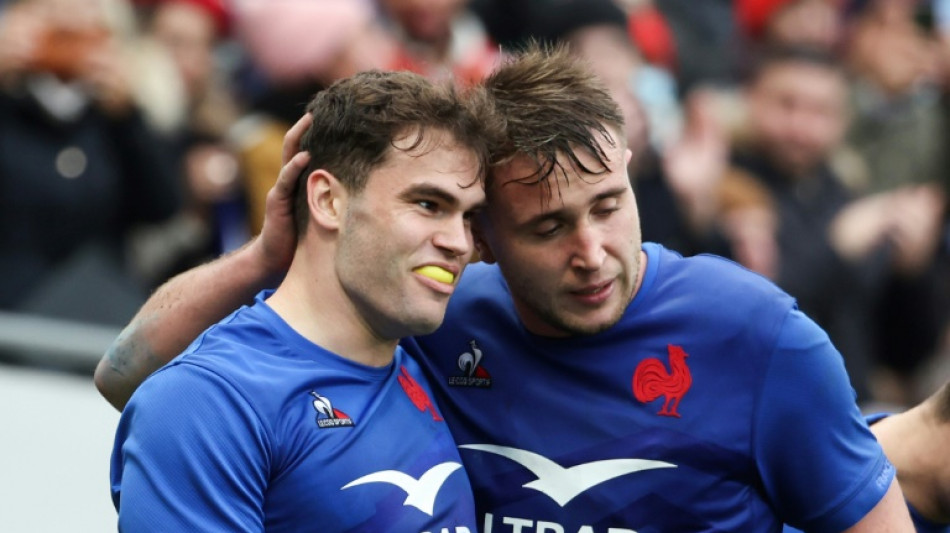 Winger Damian Penaud crossed twice as Les Bleus claimed a 13th straight success less than 10 months out from the tournament.

Along with the only side above them in the world rankings, Ireland, Ollivon's outfit are leading contenders for the competition with the two countries meeting in the Six Nations in February.

"Not everything was perfect," Ollivon told France Television.

"We keep the series going and growing in confidence.

"It's a great way to prepare for the Six Nations," he added.

With the hosts of the next World Cup meeting the home country of the last edition, head coach Fabien Galthie was forced into three changes including handing scrum-half Maxime Lucu his 11th Test appearance.

Heavy rain started to fall seconds after the anthems in front of a sold-out 34-000 capacity Le Stadium in Toulouse.

The home crowd had something to celebrate despite the downpour after just seven minutes as Les Bleus winger Damian Penaud made the most of Ryoki Yamanaka’s mistake in his own in-goal area.

Toulouse full-back Thomas Ramos then made up for missing the conversion by slotting two easy penalties and the home side led 11-0 after 17 minutes.

Brave Blossoms fly-half Seungsin Lee, brought in after last Saturday's hammering at Twickenham, opened his side's account on the quarter mark with a shot at goal to make it 11-3.

The rain stopped but the pitch and ball were left slippery before Ramos added a third penalty just after half an hour as Galthie's side led 14-3.

Les Bleus extended the advantage as Lucu set-up Ollivon, the pair coming from the same Basque village of Saint-Pee-sur-Nivelle, to slide over and they were 21-3 up at the break.

Lee converted to bring the score to 21-10 with 38 minutes left but their hopes of a comeback were short-lived.

Galthie brought Matthieu Jalibert on from Romain Ntamack just before the hour mark and the replacement fly-half's break from a chip kick down the right led to Penaud's second try of the game and his 19th try in 37 Tests.

Ramos slotted the extras as the sun threatened to come out with the home side leading 28-10 with 18 minutes to play.

The Brave Blossoms, ranked 10th in the world, refused to go down without a fight as winger Siosaia Fifita crossed and Lee converted the additional points to make it 28-17 with a quarter of an hour left.

The smart move from the back of the lineout leading to the try highlighted what the people of Toulouse can expect at next year's World Cup with Japan playing two group games in the town.

France sealed the win with seven minutes to play as flanker Anthony Jelonch crossed after another Jalibert chip before Ramos kicked the conversion to take it to 35-17 as eyes turn to the defence of their Six Nations title with just nine games to go until hosting the World Cup.