Eagles fight back to beat Colts and return to winning ways 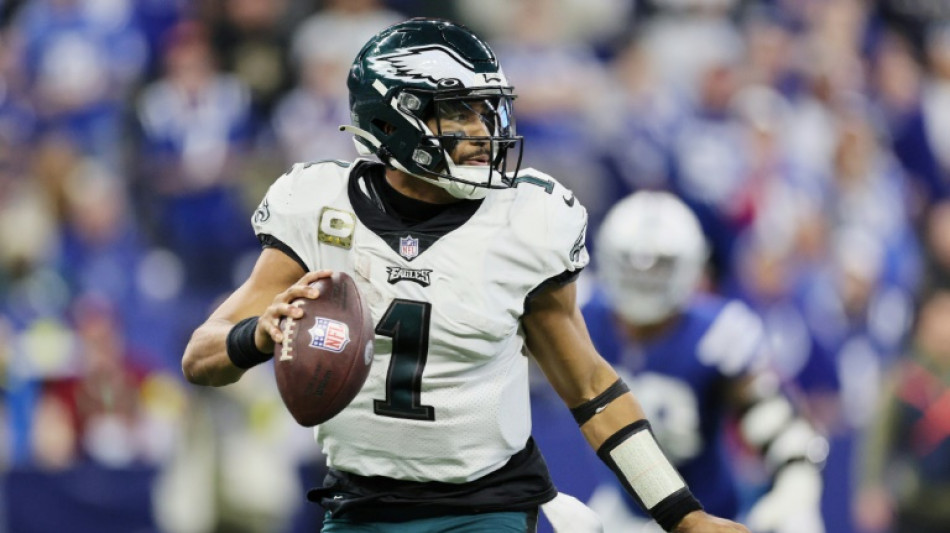 Eagles fight back to beat Colts and return to winning ways / Foto: © AFP

The Philadelphia Eagles returned to winning ways with a thrilling 17-16 late comeback NFL win at the Indianapolis Colts on Sunday.

The Eagles, whose perfect start to the season ended after eight games with a defeat to Washington last week, were staring at the prospect of another loss as they began the fourth quarter 14-3 down.

But quarterback Jalen Hurts found Quez Watkins with a 22 yard touchdown pass and after a Colts field goal, Philadelphia (9-1) snatched victory with 1:20, as Hurts rushed in for an eight yard touchdown.

"That was a great win, it wasn't what you draw up but in this league it rarely is," said Eagles head coach Nick Sirianni, who was offensive coordinator with the Colts before joining Philadelphia.

"You keep seeing it, when we need a drive, when need some points, we can always lean on our offensive line and Jalen is always special with the ball in his hands," he said.

The Buffalo Bills had been forced to move their home game with the Cleveland Browns to Detroit due to a snow storm and left with a 31-23 win to move to 7-3.

Browns quarterback Jacoby Brisett threw for 324 yards and three touchdowns but three field goals in the fourth quarter were enough to secure the win for the Bills who snapped a two game losing streak.

Patterson raced up the middle of the field with a 103-yard touchdown in the second quarter for the record-shattering runback in the Falcons' 27-24 triumph over Chicago.

It was his seventh touchdown return of more than 100 yards, with no one else in NFL history managing more than three, and his first kick return touchdown since 2020.

Lamar Jackson scored on a 1-yard touchdown run after the first of three late Carolina turnovers in the fourth quarter to give AFC North division leader Baltimore a 13-3 victory over visiting Carolina. The Ravens improved to 7-3.

Kendall Fuller returned an interception 37 yards for a touchdown and Curtis Samuel scored on a 10-yard run to spark Washington's 23-10 victory at Houston. The Commanders improved to 6-5 with their fifth triumph in six games.