As protests rage in Iran, team fall silent for anthem at World Cup 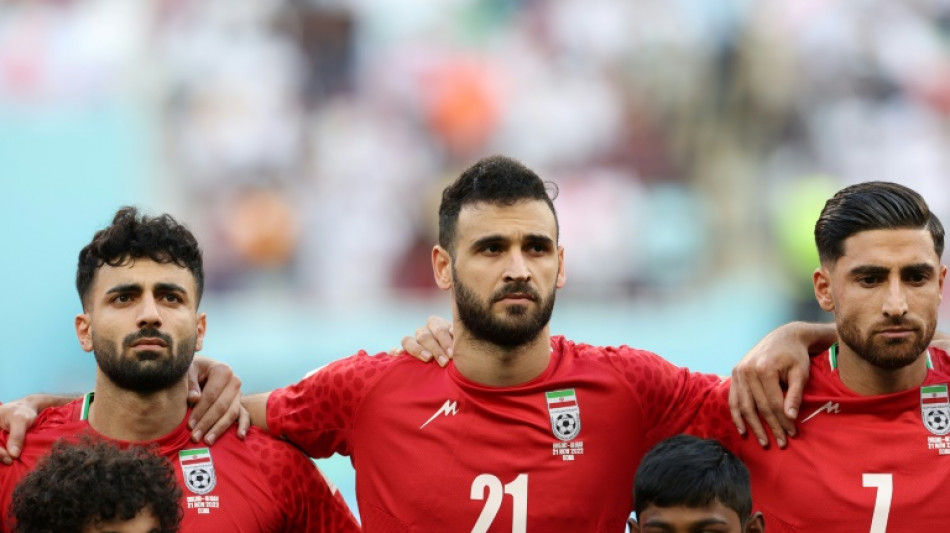 Iran's players did not sing their national anthem before their first game of the World Cup against England on Monday in apparent support for anti-government protesters in their homeland.

Ahead of the game in Qatar which Iran lost 6-2, captain Alireza Jahanbakhsh said the team would decide together whether to refuse to sing the anthem in a show of solidarity for demonstrations that have rocked the regime in the Islamic republic.

The Iranian players stood stony-faced as their anthem rang out around the Khalifa International Stadium in Doha.

Iran has been shaken by two months of nationwide protests since the death of 22-year-old Mahsa Amini in morality police custody on September 16.

Amini, a 22-year-old Iranian of Kurdish origin, died three days after her arrest in Tehran over an alleged breach of the dress code for women, which includes the mandatory hijab headscarf.

The players' behaviour in Doha is being closely scrutinised because many of the opponents of the Iranian regime have expressed anger at what they view as the lack of support from the team known as Team Melli.

That image was reinforced for many when the players had an audience with Iran's ultra-conservative President Ebrahim Raisi before they left for the World Cup.

It made for a charged atmosphere before the match.

After the players had stood impassively for the anthem, TV cameras briefly picked out a woman in the crowd, a headscarf on her head and tears in her eyes.

Sardar Azmoun, the team's star who had expressed support for the protests on social media earlier this year, was brought on in the second half. He appeared a shadow of the player he has been for his German club Bayer Leverkusen in recent months.

A banner with the slogan of the protest movement, "Women Life Freedom", was briefly hoisted among the Iranian supporters and now and again shouts of "Azadi, Azadi", meaning "freedom, freedom", rang out.

In the Iranian capital Tehran, about 200 people gathered to watch the match on a giant screen near the national library.

Farzad, a 21-year-old student who did not want to give his full name, said: "I have always supported the national team, but not this time because the players have not supported the people.

"On this occasion, I was not upset by the team's defeat."

In Qatar, the team's Portuguese coach Carlos Queiroz said the political unrest at home had taken a toll on the squad.

"It is not right to come to this World Cup and ask them to do things that are not their responsibility. They want to bring pride and joy for the people," Queiroz told reporters.

"You don't even imagine behind the scenes what these kids have been living in the last few days, just because they want to express themselves as footballers."

The state's response has led to questions over whether the team represents Iran or the regime that has ruled with an iron fist since the Islamic Revolution of 1979.