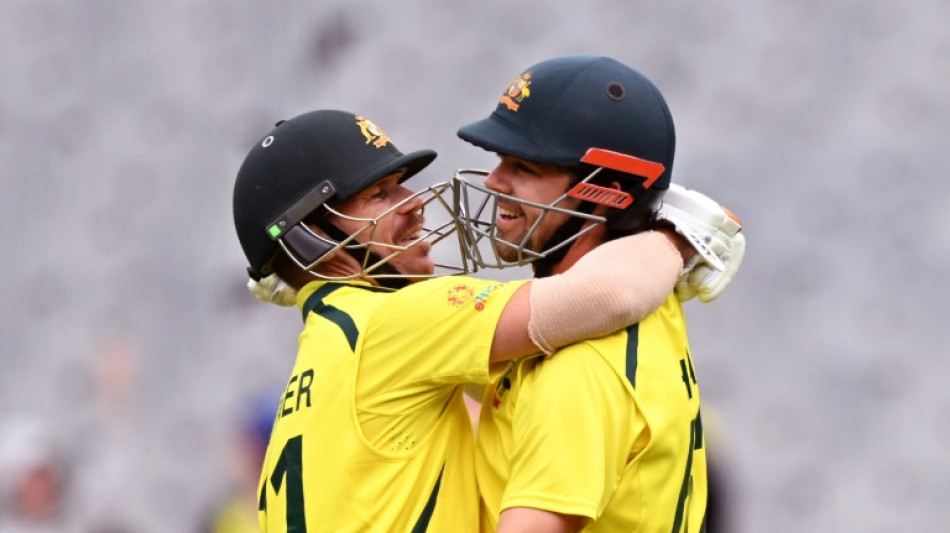 Travis Head belted 152 and David Warner 106 as Australia scored a formidable 355-5 in the third and final one-day international against England on Tuesday as they look to sweep the series.

The hosts lead 2-0 after a six-wicket victory in Adelaide then a 72-run win at Sydney, with England playing for pride on their return to the venue where they won the Twenty20 World Cup this month.

But after captain Jos Buttler, back after missing the Sydney game, won the toss and asked Australia to bat, they were dominated by the in-form openers in a rain-hit game reduced to 48 overs, which left England needing a DLS-adjusted target of 364 to win.

Head made his third one-day century and highest score, off 130 balls with 16 fours and four sixes, as he solidified his place at the top of the order after the retirement of Aaron Finch.

Warner built his 19th ODI ton off 97 balls and the pair's 269-run stand was the ninth highest opening partnership in 50-over cricket and the biggest at the MCG.

Worse for England, opener Phil Salt hit his head diving in the field and was unable to continue. Moeen Ali replaced him as a concussion substitute.

With conditions overcast and cool, the bowlers extracted early swing and Head survived a missed catch on four and being given out lbw on nine, which he successfully reviewed.

But he soon settled as he and Warner assumed full control. Head reached his second 50 of the series with a boundary off Sam Curran, shortly before they brought up their second 100-run partnership in three matches.

Rain interrupted play for 30 minutes but the pair resumed where they left off with Head racing to his century off 91 balls, bringing up the milestone with a four from Chris Woakes. Warner soon followed, crunching Stone to the ropes.

The partnership was finally broken by the persistent Stone, who bagged both Warner and Head in the same over and finished with 4-85 after removing Mitchell Marsh for 30 and Steve Smith for 21.