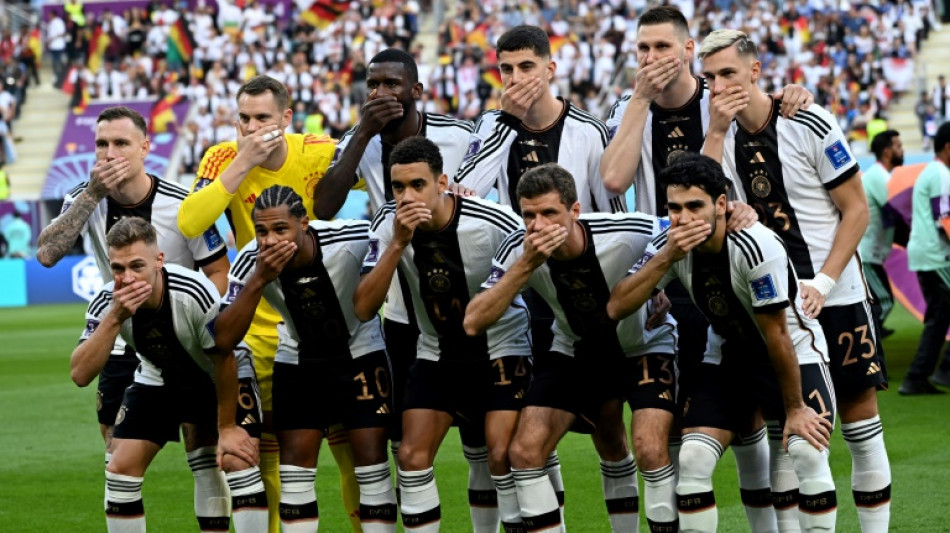 German players covered their mouths for a World Cup team photo on Wednesday in a protest against FIFA's decision to ban rainbow-themed armbands as Luka Modric's Croatia played out a 0-0 draw against Morocco.

The build-up to Germany's game against Japan was dominated by intense speculation over whether captain Manuel Neuer would wear the "OneLove" armband, viewed as a symbolic protest against laws in Qatar, where homosexuality is illegal.

Seven nations, including England and Germany, had abandoned plans to wear the armbands because of the threat of disciplinary action from world governing body FIFA, including bookings.

The Bayern Munich goalkeeper did not wear it at the Khalifa International Stadium but the entire team instead covered their mouths before kick-off.

Germany's football federation tweeted in English minutes after the photo protest to explain their position.

"It wasn’t about making a political statement -- human rights are non-negotiable," the DFB said.

"Denying us the armband is the same as denying us a voice. We stand by our position."

German Interior Minister Nancy Faeser, who was to attend the game, said FIFA's ban was a "huge mistake".

Four-time World Cup winners Germany are desperate to make amends in Qatar after crashing out at the group stage in Russia four years ago when they were defending champions.

Croatia, who reached the final in 2018, enjoyed the bulk of possession in the Group F match but failed to break down their opponents at Al Bayt Stadium.

Spain, in Group E alongside Germany, take on Costa Rica later on Wednesday while Belgium face Canada in the late match in Group F.

Spain hope to make a far smoother entrance than they did in Russia, where Julen Lopetegui was sacked on the eve of the tournament for accepting the Real Madrid job.

They have the third-youngest squad at the World Cup, with Luis Enrique leaning on younger talents while some older players such as Sergio Ramos missing.

Time is running out for Belgium's so-called "Golden Generation", who formed the backbone of the squad that finished third at the last World Cup.

Canada are returning to the World Cup for the first time in 36 years, boosted by the return to full fitness of Alphonso Davies.

South Korea coach Paulo Bento confirmed that Tottenham forward Son Heung-min was fit enough to play in Thursday's match against Uruguay even though he has been training in a face mask.

But he cautioned that they "cannot take any risks" with the player, who suffered a fracture around his left eye earlier this month.

England manager Gareth Southgate is sweating on the fitness of captain Harry Kane, who is reportedly due to have a scan on his ankle.

The Spurs forward left the Khalifa International Stadium on Monday with strapping to his ankle after England's 6-2 win over Iran but took part in a light training session on Tuesday.

Ronaldo's Portugal face Ghana in the other match in Group H on Thursday, two days after he left United by "mutual agreement" after a bombshell interview last week in which he lashed out at the club.

Bruno Fernandes, who was Ronaldo's teammate at Old Trafford, said Portugal were entirely focused on the World Cup despite the distraction of the United divorce.

"It was a dream come true to play with Cristiano at United but nothing lasts forever," he said.

"In his career, and we have to respect such decisions, every decision has to be respected regardless of agreeing or not."