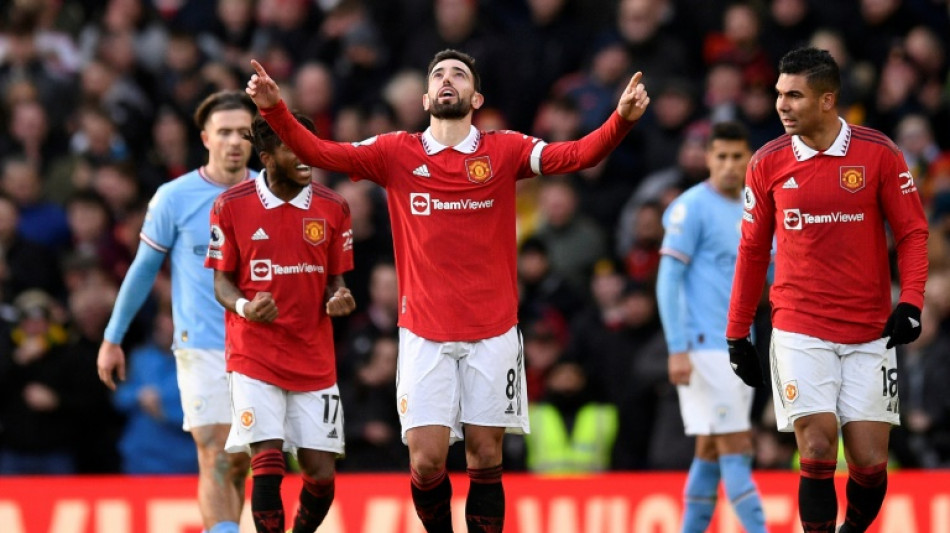 Manchester United fought back for a dramatic 2-1 win against Manchester City that left their arch rivals fuming over a controversial VAR decision to allow Bruno Fernandes' equaliser, while troubled Liverpool crashed to a shock 3-0 defeat at Brighton on Saturday.

On a dramatic day of Premier League action, Everton boss Frank Lampard was pushed closer to the sack as his struggling side were beaten 2-1 by relegation rivals Southampton.

Fernandes' goal was the turning point and City boss Pep Guardiola and his players were seething after the flag went up for offside when Rashford ran on to Casemiro's pass.

Rashford did not touch the ball and was deemed by VAR not to have interfered with play, but City were adamant the England forward clearly distracted the defenders and goalkeeper Ederson.

"The first goal is a joke that it can be allowed," City defender Manuel Akanji told BBC Sport.

"He runs for 30 metres, he's chasing the ball. In the situation, I played him (Rashford) offside. I understand he doesn't touch the ball, but for me it is clearly offside."

Guardiola insisted there was no doubt Rashford's run impacted the reactions of Akanji and Ederson.

"The decision is the referee's, the VAR, but our defenders make a line for Rashford," he said.

"If we know it's Fernandes we don't make the line, we follow the action, and after the action the interference for Ederson."

Third placed United are now just one point behind second placed City, who are in danger of losing substantial ground in the title race this week.

A win for leaders Arsenal at north London rivals Tottenham on Sunday would put the Gunners eight points clear.

While City splutter, United are in fine form following their ninth successive victory in all competitions.

Asked if they are in the title race, boss Erik ten Hag said: "The fans may dream but we are not. We have improved, that is obvious. There is still a long way to go."

Liverpool's hopes of salvaging a top four finish from a difficult campaign suffered a major hit as Brighton swept to victory on the south-coast.

After dominating the first half without making the breakthrough, Brighton deservedly took the lead in the 47th minute.

Joel Matip carelessly surrendered possession to Alexis Mac Allister and he found Kaoru Mitoma, whose cross was perfectly weighted for the unmarked Solly March to tap in.

Liverpool were in disarray and six minutes later, March crashed a fine finish into the far corner from just inside the area.

Beaten at Brentford in their previous league game, Liverpool are languishing in eighth place, seven points adrift of the top four, and look a shadow of the team that nearly won the quadruple last term.

Liverpool's Merseyside rivals Everton are in even more dire straits after Southampton's 2-1 win at Goodison Park.

Everton's board of directors did not attend the game because of a "real and credible threat to their safety".

Everton chief executive Denise Barrett-Baxendale was reportedly manhandled by a fan and had her car attacked after last week's 4-1 home defeat by Brighton.

Everton have won only one of their last 13 matches in all competitions and banners and flags calling for the board to leave were unfurled before kick-off.

Southampton fell behind in the 39th minute as Amadou Onana headed home from Demarai Gray's corner.

But less than two minutes into the second half, James Ward-Prowse collected Che Adams' knock-down on the edge of the area and drilled Southampton's equaliser.

Ward-Prowse inflicted greater pain in the 78th minute when he whipped one of his trademark free-kicks past Jordan Pickford.

West Ham fill the final place in the bottom three after a 1-0 defeat at Wolves that saw the hosts move above the hapless Hammers.

Daniel Podence netted in the 48th minute to leave West Ham without a win in their last seven league games.