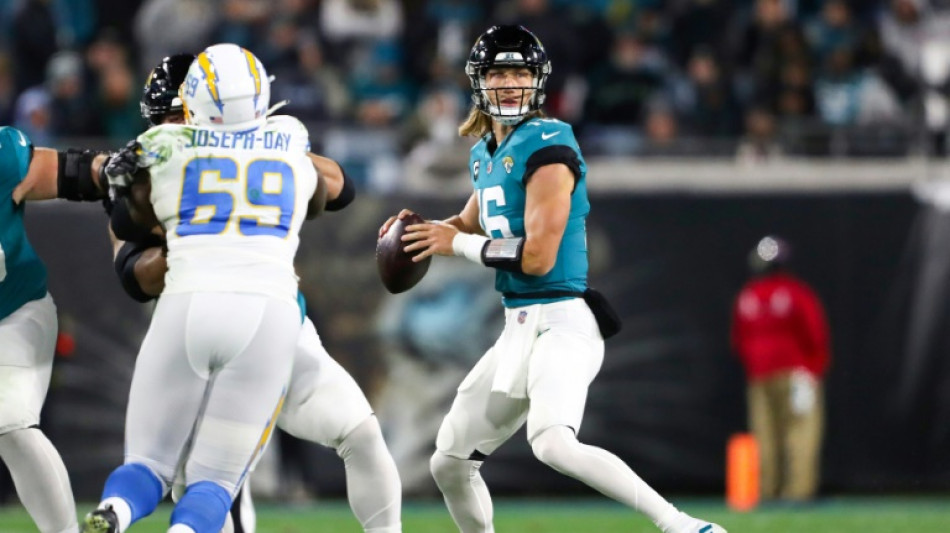 The Jacksonville Jaguars pulled off a remarkable playoff comeback, fighting back from 27 points down to beat the Los Angeles Chargers 31-30 while rookie quarterback Brock Purdy led the San Francisco 49ers past the Seattle Seahawks 41-23 in the NFL playoffs on Saturday.

A last second, 36-yard field goal from Riley Patterson completed an astonishing turnaround from the Jaguars, who had trailed 27-0 late in the second quarter of the AFC wildcard clash.

It was the third-biggest comeback in NFL playoff history and came after Jacksonville quarterback Trevor Lawrence endured a nightmare first half, throwing four interceptions.

"They couldn't have written a better script," Lawrence said. "We are never out of the fight."

The game had all the hallmarks of a blowout as the Chargers took advantage of Jacksonville's turnovers, with a pair of rushing touchdowns in the first quarter from Austin Ekeler.

Asante Samuel had grabbed three of the picks for the Chargers, who extended their advantage to 27-0 with Gerald Everett collecting a nine yard touchdown pass from Justin Herbert and Cameron Dicker converting a 23-yard field goal.

"I was breaking, not a good record in the first quarter, I had a couple of interceptions, we were not looking good offensively but we just kept believing in one another," Lawrence said.

The Jags gave themselves some hope just before the interval with Lawrence finding Evan Engram with a nine yard touchdown pass, but there was no sign of what was to come.

Jacksonville began the second half with a 14-play, 89-yard drive which ended with Lawrence finding Marvin Jones in the corner of the end zone.

After a Cameron Dicker 50-yard field goal for the Chargers, Lawrence threw a 39-yard touchdown pass to Zay Jones.

With 5:25 left in the fourth, Lawrence connected with Christian Kirk and then reached across the line for a two-point conversion.

That left Jacksonville needing just a field goal to complete the stunning result and a ten-play, 61-yard drive left Patterson to convert from 36-yards and set off the wild celebrations.

San Francisco quarterback Purdy, who only took on the starting role last month after injury to Jimmy Garoppolo, became the first rookie quarterback with three touchdown passes and a rushing touchdown in a playoff game.

Putting any early nerves aside, Purdy threw for 332 yards and no interceptions while running back Christian McCaffrey rushed for 119 yards.

The 49ers made a strong start, opening up a 10-0 lead when McCaffrey rushed three yards into the end zone to finish off a drive that had seen him produce a blistering 68-yard run.

A 33-yard field goal from Robbie Gould for the 49ers made it 13-7, but Seattle got themselves in front when quarterback Geno Smith found D.K. Metcalf with a 50-yard scoring pass.

Another Gould field goal restored San Francisco's advantage but then some ill-discipline from the normally rock solid Niners defense allowed the Seahawks to go in at half-time with a 17-16 lead.

But San Francisco started the second half in emphatic fashion with a 13-play drive ending in a quarterback sneak from Purdy.

Smith was than sacked by Charles Omenihu with Nick Bosa recovering the ball for a decisive turnover.

Purdy connected with Jauan Jennings with a 33-yard pass and then found Elijah Mitchell with a short pass which the running back took into the end zone.

The 49ers went for the two-point conversion, Purdy finding tight-end George Kittle to make it 31-17.

Seattle fell further behind when they left Deebo Samuel in acres of space to collect a pass from Purdy and burst down the left for a 74-yard touchdown.

When Smith was picked off by Deommodore Lenoir it was all over for a Seattle team who had snuck into the playoffs when the Green Bay Packers lost their final game of the regular season.