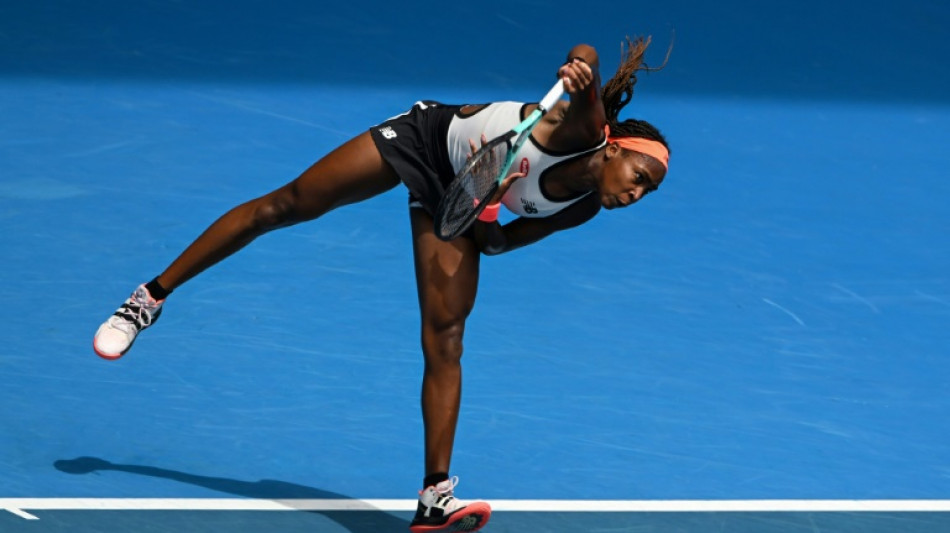 Coco Gauff raced into the second round of the Australian Open to set up a blockbuster clash with Emma Raducanu after a 6-1, 6-4 victory over Katerina Siniakova on Monday.

Former US Open champion Raducanu, who is unseeded at Melbourne Park, beat German Tamara Korpatsch, 6-3, 6-2, barely 10 days after exiting the Auckland event in tears with an ankle injury.

Gauff, 18, won in Auckland and said she could empathise with the pressure the young British star comes under ahead of their first meeting on tour.

"I talk to her (Raducanu) pretty much at all the tournaments," seventh seed Gauff told reporters after breezing through in an hour and 15 minutes on Rod Laver Arena.

"Obviously I was a lot younger when I got the attention, so I definitely think handling it at an older age is a little bit easier than at 15.

"But also, at the same time, I didn't win a Slam. I'm not British, and wasn't the first British woman to do that in I don't know how many years.

"I definitely can relate to bursting onto the scene and dealing with some pressure but I don't think to that level."

Raducanu, 20, who stunned the tennis world by emerging from qualifying to win the US Open in 2021 but has struggled on tour since, said she couldn't wait to test herself against Gauff.

"I'm very up for it. Coco has obviously done a lot of great things and she's playing well.

"I think we're both good, young players, we're both coming through -- part of the next generation of tennis really -- it's going to be a great match."

The two young stars have never faced off before, but there is mutual respect, with both having emerged onto the world scene at an early age.

"I mean, I know her a fair bit," said Raducanu. "Off the court, she's really nice and friendly and really down-to-earth. Yeah, she's cool."

Gauff wasted no time Monday in stamping her authority on 46th-ranked Siniakova, breaking the Czech in the fourth and sixth games to take the opening set 6-1 in 22 minutes.

She had to work much harder in the second set, breaking back immediately after going 4-2 down and then again for a 5-4 lead.

She secured the match in an hour and 15 minutes on her seventh match point after a final game that lasted more than 10 minutes.

Gauff would become the youngest Australian Open champion since 16-year-old Martina Hingis in 1997 if she lifts the winner's Daphne Akhurst Cup on January 28.