Medvedev latest to exit Australian Open but Swiatek charges on 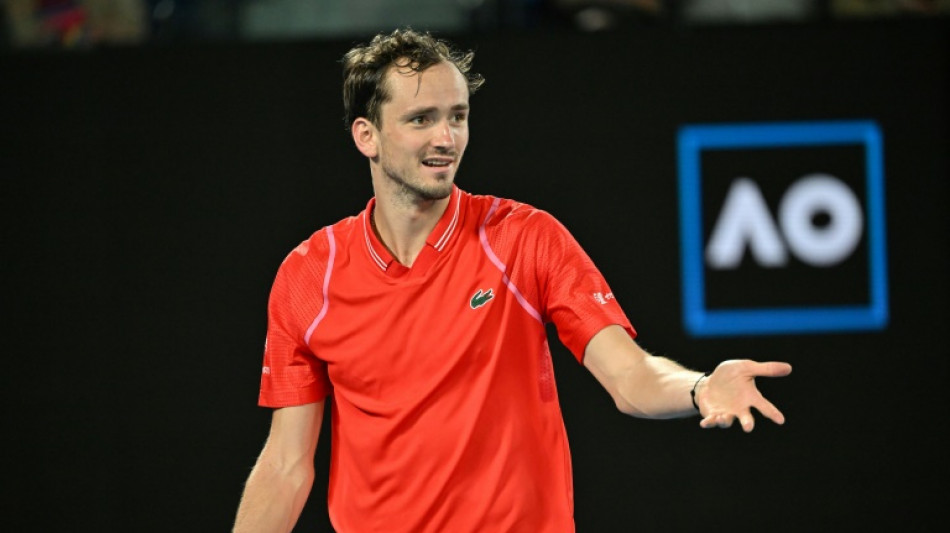 Daniil Medvedev on Friday became the latest title contender to crash out of the men's draw at the Australian Open, but Iga Swiatek led a charge of the women's seeds into the last 16.

Russia's Medvedev was runner-up at the last two Grand Slams in Melbourne but his tournament ended with a whimper in round three at the hands of Sebastian Korda.

"I sort of knew what I had to do and I stuck with it even when I was going up and down with the emotions.

With world number one Carlos Alcaraz not involved because of injury, Medvedev's surprise defeat to the 29th seed is another boost to nine-time Australian Open champion Novak Djokovic.

The hot favourite, who is nursing a hamstring problem, plays 27th seed Grigor Dimitrov on Saturday.

Stefanos Tsitsipas is now the highest remaining seed at three and the Greek star stretched his unbeaten streak this year to set up a last-16 clash with Italian Jannik Sinner.

Tsitsipas is refusing to get carried away as he chases a first major title.

"There are no presents," he warned.

"You should be going after it, you should be creating those opportunities and aiming big within yourself, sometimes surpass your own abilities."

In the women's draw, world number one Swiatek and the Americans Coco Gauff and Jessica Pegula were all emphatic winners.

"I will have to take all my chances. I think Iga is a great player."

The 18-year-old Gauff stepped up her bid for a maiden major title with a similarly ruthless 6-3, 6-2 victory over fellow American Bernarda Pera.

The talented teenager faces the 2017 French Open champion Jelena Ostapenko of Latvia in the last 16.

Third seed Pegula, who is also chasing a first Grand Slam crown, made light work of Marta Kostyuk with a 6-0, 6-2 victory.

The 28-year-old next faces what should be a sterner test in Barbora Krejcikova of the Czech Republic, the former French Open champion.

Off the court, Australian Open chief Craig Tiley insisted there was "no need" to alter the scheduling, despite stinging criticism after the second-latest finish at a Grand Slam ever.

Veteran Andy Murray battled through a five-set epic against home hope Thanasi Kokkinakis which ended at 4:05 am on Friday, calling the early hours conclusion "a bit of a farce".

Tiley defended the schedule, saying such late matches did not happen often, after Murray's brother Jamie -- a doubles specialist playing at Melbourne Park -- was among those calling for only one night match at majors.

"If you just put one match at night and there's an injury, you don't have anything for fans or broadcasters," said Tiley.