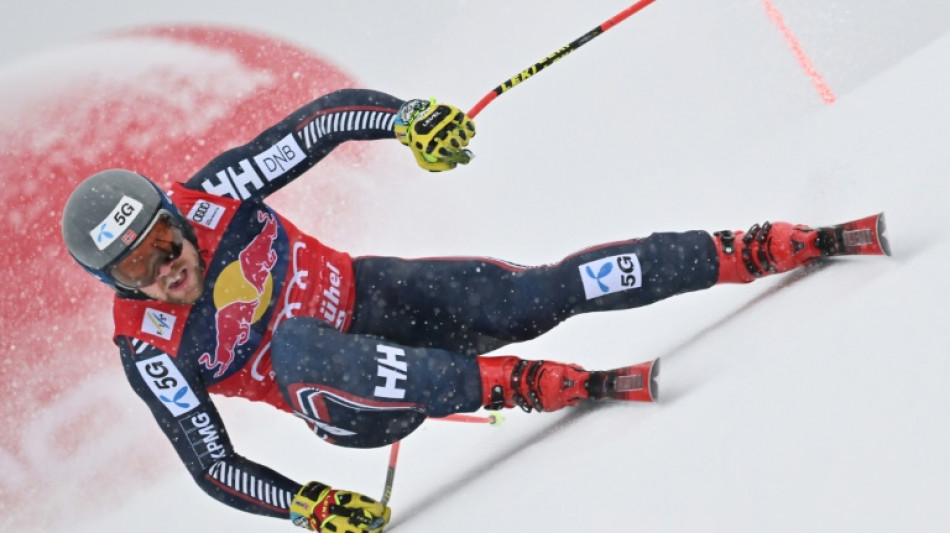 Norway's Aleksander Aamodt Kilde notched up the second World Cup downhill victory of his career in Kitzbuehel on Saturday in a massive morale booster going into next month's world championships.

The result saw Kilde move to within 225 points of Switzerland's Marco Odermatt in the overall World Cup standings. The Swiss racer opted out of racing Saturday after taking a bang to his knee in Friday's downhill, no doubt with one eye firmly fixed on the February 6-19 world champs in Courchevel and Meribel.

France's Johan Clarey, the doyen of ski racing at the venerable age of 42, claimed second place for a third time in Kitzbuehel, in 1:57.57, to improve his own record as the oldest skier to make a World Cup podium.

In a race often dubbed alpine skiing's equivalent to the Monaco Grand Prix, a raucous 50,000-strong crowd was welcomed back around the finish area after two years when fan numbers were slashed back because of Covid-19 restrictions.

Among the onlookers was Arnold Schwarzenegger, the Austrian bodybuilder/actor-cum-California governor, resplendent in a traditional broad-rimmed felt hat and matching anthracite and fir green coat typical of his native Styria region.

Clapping in unison amid flares, flags and fiery alcohol, the crowd egged on the skiers who flung themselves down the 3.3km-long Streif course on the Hahnenkamm mountain regarded as the toughest on the circuit.

It is a guaranteed thigh-trembling descent, which made its debut in 1931 and now sees the skiers reach motorway-coasting speeds while negotiating sections that have an 85-percent gradient and battling crippling centrifugal forces.

The icy course, which has a stomach-churning vertiginous start that propels racers to 100km/h in five seconds, features falls, snakes and rolls through a wide variety of terrain.

And so comes into play the so-called "risk management": how much a racer is able to push himself, much like a Formula One driver, in the knowledge that one slight error might mean hurtling into some of the 15km of nets and fencing down the course.

Kilde had said before the race that each racer has "a bottle filled with risk, when do you want to empty that bottle?"

Kicking out of the startgate to Kenny Loggins' upbeat 1980s pop rock classic 'Footloose', Kilde didn't necessarily take all risks, but he did lay down a near-perfect run, importantly holding his line as he came off the final traverse into the final jump, where he'd almost come a cropper in Friday's downhill.

Switzerland's Olympic champion Beat Feuz, a three-time winner on the Streif, finished 16th, more than 2sec off the pace, while another three-time Kitzbuehel champion, Italy's Dominik Paris, was 14th at 1.92sec.

Kitzbuehel has been witness to many crashes over the years and Saturday's racing was no exception as 2018 champion Thomas Dressen of Germany, Americans Jared Goldberg and Sam Morse, and France's Cyprien Sarrazin were among those who slid out, to momentarily silence the crowd.