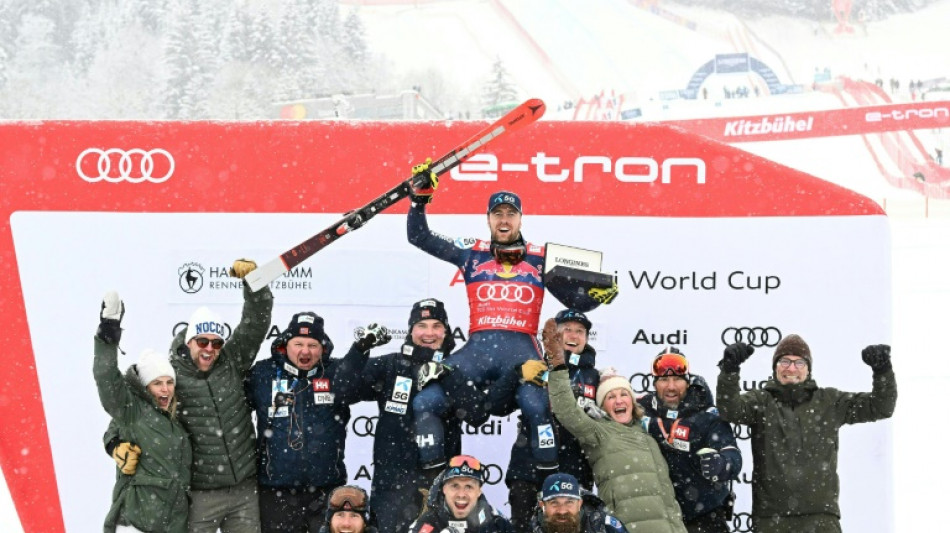 Norway's Aleksander Aamodt Kilde admitted to having to banish a dip in self-confidence to bounce back for what he dubbed one of his greatest victories in the second Kitzbuehel downhill on Saturday.

Kilde had a scare in Friday's first downhill on the famed Streif course, going wide from the final traverse into the jump that leads into the finish area.

The Norwegian was just centimetres away from hitting the safety netting as he exited with a dramatic one-ski save.

There followed a horrific crash for teammate Henrik Roea, who caught an edge just metres before the finish and ended up propelled forwards as his legs split in a freak accident.

"It was a really tough day yesterday with my run and a painful hand. It was a tough day for Team Norway yesterday. So, we had to dig deep to get it going today," acknowledged Kilde.

"We had a pretty bad injury with one of our guys. We're four athletes, you lose one of them and it's a big impact for the team.

"Also the situation yesterday for me was quite scary. I needed to take the speed down a little bit and in the end just hammer down the traverse and finish by seeing green numbers."

"In Kitzbuehel, you need to send it or else it's going to be really dangerous."

Kilde, one part of alpine skiing's glamour couple with partner Mikaela Shiffrin, added: "This is for sure one of my biggest victories, if not the one. I'm really proud of myself after a tough couple of days.

"To be able to just get back on the horse again and be able to deliver like today. I didn't believe that in myself, honestly. After yesterday, there were many thoughts in my head that were not giving me the confidence to win.

"But when I woke up this morning I just decided 'You know what, I'm doing this once in my life and I'm just going for it'."

The victory was Kilde's seventh of the season and the second time he has topped the podium at the famed Kitzbuehel downhill.

Close on the Norwegian's tail was the doyen of alpine skiing, 42-year-old Frenchman Johan Clarey.

"What an incredible skier," Kilde said of Clarey. "What he did today is also really cool and inspiring to be at that age and ski here like that."

Clarey's second place was his third in Kitzbuehel and just reward for another fine showing from the veteran, 0.67sec off Kilde, after two difficult weeks working through some personal problems.

"I'm second again, but behind a guy who's almost unbeatable at the moment," said Clarey. "I haven't really thought of my age, but it's a record that will be tough to beat.

"I've been emotionally and morally very low," he said, before looking ahead to the February 6-19 world championships on home snow in Courchevel and Meribel.

"I'll take all the positive energy, pressure will only be positive, and I'll enjoy the moment."