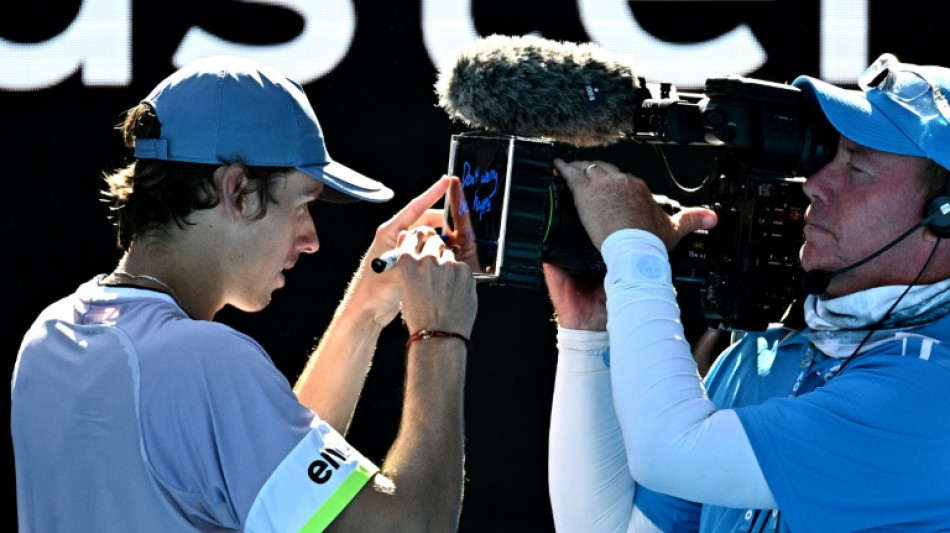 Home fans at the Australian Open don't have the temperamental but talented Nick Kyrgios to roar on -- but they do have a "Demon".

With Kyrgios out injured and another popular Australian retired in 2022 champion Ashleigh Barty, Alex de Minaur has emerged as a crowd favourite of the locals.

The 23-year-old, nicknamed Demon, is the only Australian left in men's or women's singles and will need all the help he can get when he faces nine-time Melbourne Park champion Novak Djokovic in the last 16 on Monday.

"Look, it's no secret that I love playing here in my backyard," said De Minaur, who was born in Sydney but whose father is Uruguayan and his mother Spanish.

"I think the Aussie crowd is amazing. They've had my back from day dot, so I'll always cherish that," added De Minaur, who also speaks Spanish and French.

De Minaur was roared on at the main court, the 15,000-capacity Rod Laver Arena, on Saturday as Frenchman Benjamin Bonzi wilted under the pressure of the home fans and his opponent's relentless ground strokes.

It is the second year in a row that De Minaur has made it to the fourth round at Melbourne. His best performance at a Grand Slam was the US Open quarter-finals in 2020.

The difference between De Minaur and the fiery Kyrgios is stark.

But while De Minaur does not display the crowd-pleasing antics of the colourful Kyrgios, he has won admirers for his speed across the court and lets his tennis do the talking.

Spain has played a big part in De Minaur's journey.

The Australian first picked up a racquet aged four and then his family moved to Spain in 2004 when he was five, spending the next eight years there.

They returned to Australia for three years, then went back to Spain again, mostly on account of his parents' business.

De Minaur turned professional in 2015, but 2019 was his breakout year as he won his first ATP title in Sydney on the eve of the Australian Open and added two more in the same season, in Atlanta and Zhuhai.

Speaking after dismissing Bonzi in three sets, De Minaur laid out his lofty ambitions beyond the first Grand Slam of the year.

"Every year getting a bit bigger, a bit stronger, working on different aspects of my game," he said.

"Overall, I'm getting better. I'm taking it to the top guys in the world, making it deep into Slams.

"It's all about chasing that goal of being amongst the best in the world."

He may have an international background, but De Minaur is very much a Melbourne favourite, especially now that he shoulders home hopes.

De Minaur says the support makes a huge difference as he attempts to make the most of a men's draw which is now missing world number one Carlos Alcaraz, defending champion Rafael Nadal and second seed Casper Ruud.

"I think the difference is that the opponents not only have to play against me," he said.

"But they've got to play against me and the whole crowd, right?"

It was a theme acknowledged by Djokovic, who is struggling with a hamstring injury.

"It's a big challenge of playing an Aussie guy here in front of his home crowd," said the Serb.