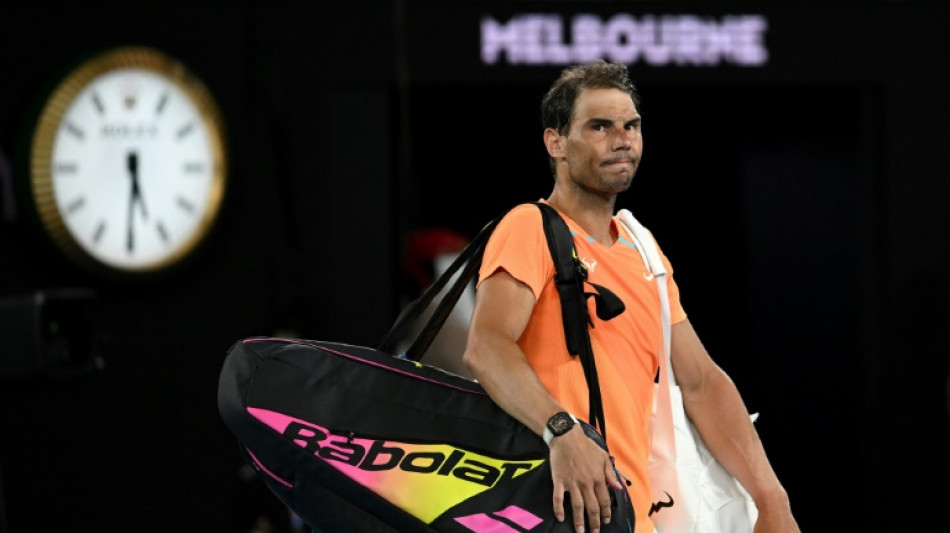 Novak Djokovic ploughs on with a bad hamstring but the 2023 Australian Open will already be remembered for the sheer number of shocks and an absence of "star" names.

Iga Swiatek's defeat on Sunday makes it the first Grand Slam since the Open era began in 1968 to lose the top two seeds in both the men's and women's draws before the quarter-finals.

Halfway through the tournament, fans stop to snap pictures with a large poster of Rafael Nadal on display at Melbourne Park but the man himself is long gone.

The top men's seed and defending champion looked far from his brilliant best in his opening match and then went out in the second round to unseeded American Mackenzie McDonald.

The 36-year-old Nadal, who has a record 22 major crowns to his name, was badly hampered by a hip injury as he bowed out in straight sets on Wednesday.

"Definitely there's kind of a void," said spectator Rob Duff, after photographing his son next to the image of the Spanish great.

"The Australian tennis fans, we love to see the big names, and when they are out, it takes (away) a little bit of the tournament."

The first Grand Slam of the year is barely into its second week but the die was cast even before a ball was hit.

Two greats of the game, Serena Williams and Roger Federer, retired last year and, despite the American hinting she could make a return to tennis, she was never expected in Australia.

Another big miss, especially for home fans, was the reigning women's champion Ashleigh Barty. The Australian retired in March last year while the dominant number one.

More big names fell by the wayside in the days before the tournament. Injured men's number one Carlos Alcaraz pulled out, then so did two-time Australian Open champion Naomi Osaka.

There were fears the 25-year-old former world number one might quit tennis altogether, but Osaka later clarified that she was pregnant and expects to return to the court in 2024.

The first day of the Grand Slam saw yet another popular figure withdraw, without even stepping on court.

Australian showman Nick Kyrgios, the Wimbledon finalist and a crowd favourite, said he had a knee problem that would require minor surgery.

Daniil Medvedev, the Russian who reached the finals at the last two Australian Opens, was next to go when he lost in round three.

It has left Stefanos Tsitsipas as the highest-ranking men's seed left at three and in with a big chance to win his first Grand Slam.

Nine-time Melbourne champion Djokovic will have a lot to say about that, but the Serb is struggling with his left hamstring ahead of his last-16 meeting with Alex de Minaur.

On yet another day of surprises Sunday, top women's seed Swiatek and seventh seed Coco Gauff were both dumped out, promptly followed in the men's draw by sixth seed Felix Auger Aliassime.

Holger Rune, the surviving ninth seed from Denmark, said the results were proof of the high standard in men's tennis.

"I see every match is tough and I have to be at 100 percent because everybody is playing amazing," said the 19-year-old.