Webb begins hunt for the first stars and habitable worlds 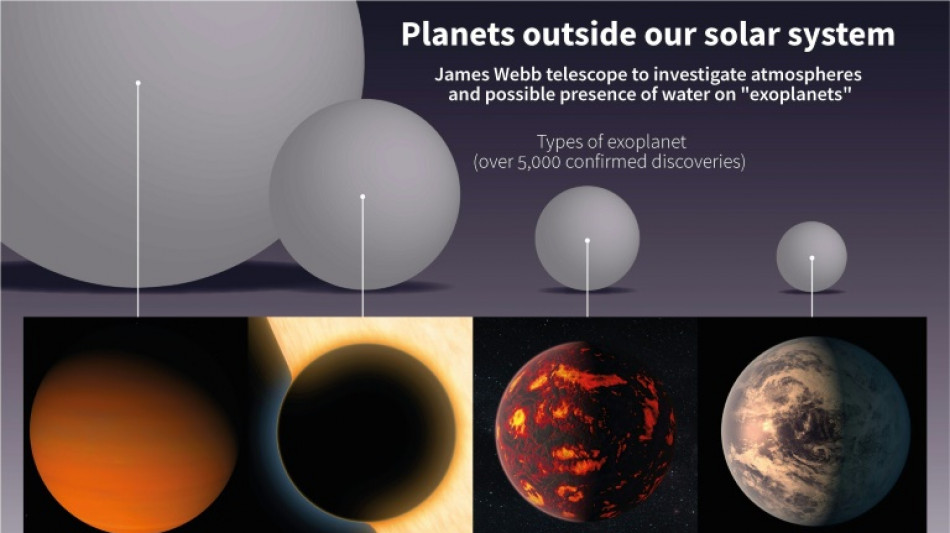 The first stunning images from the James Webb Space Telescope were revealed this week, but its journey of cosmic discovery has only just begun.

Here is a look at two early projects that will take advantage of the orbiting observatory's powerful instruments.

- The first stars and galaxies -

One of the great promises of the telescope is its ability to study the earliest phase of cosmic history, shortly after the Big Bang 13.8 billion years ago.

The more distant objects are from us, the longer it takes for their light to reach us, and so to gaze back into the distant universe is to look back in the deep past.

"We're going to look back into that earliest time to see the first galaxies that formed in the history of the universe," explained Space Telescope Science Institute astronomer Dan Coe, who specializes in the early universe.

Astronomers have so far gone back 97 percent of the way back to the Big Bang, but "we just see these tiny red specks when we look at these galaxies that are so far away."

"With Webb, we'll finally be able to see inside these galaxies and see what they're made of."

While today's galaxies are shaped like spirals or ellipticals, the earliest building blocks were "clumpy and irregular," and Webb should reveal older redder stars in them, more like our Sun, that were invisible to the Hubble Space Telescope.

Coe has two Webb projects coming up -- observing one of the most distant galaxies known, MACS0647-JD, which he found in 2013, and Earendel, the most distant star ever detected, which was found in March of this year.

While the public has been enticed by Webb's stunning pictures, which are shot in infrared because light from the far cosmos has stretched into these wavelengths as the universe expanded, scientists are equally keen on spectroscopy.

Analyzing the light spectrum of an object reveals its properties, including temperature, mass, and chemical composition -- effectively, forensic science for astronomy.

Science doesn't yet know what the earliest stars, which probably started forming 100 million years after the Big Bang, will look like.

"We might see things that are very different," said Coe -- so-called "Population III" stars that are theorized to have been much more massive than our own Sun, and "pristine," meaning they were made up solely of hydrogen and helium.

These eventually exploded in supernovae, contributing to the cosmic chemical enrichment that created the stars and planets we see today.

Some are doubtful these pristine Population III stars will ever be found -- but that won't stop the astronomical community from trying.

Astronomers won time on Webb based on a competitive selection process, open to all regardless of how advanced they are in their careers.

Olivia Lim, a doctoral student at the University of Montreal, is only 25 years old. "I was not even born when people started talking about this telescope," she told AFP.

Her goal: to observe the roughly Earth-sized rocky planets revolving around a star named Trappist-1. They are so close to each other that from the surface of one, you could see the others appearing clearly in the sky.

"The Trappist-1 system is unique," explains Lim. "Almost all of the conditions there are favorable for the search for life outside our solar system."

In addition, three of Trappist-1's seven planets are in the Goldilocks "habitable zone," neither too close nor too far from their star, permitting the right temperatures for liquid water to exist on their surface.

The system is "only" 39 light year away -- and we can see the planets transit in front of their star.

This makes it possible to observe the drop in luminosity that crossing the star produces, and use spectroscopy to infer planetary properties.

It's not yet known if these planets have an atmosphere, but that's what Lim is looking to find out. If so, the light passing through these atmospheres will be "filtered" through the molecules it contains, leaving signatures for Webb.

The jackpot for her would be to detect the presence of water vapor, carbon dioxide and ozone.

Trappist-1 is such a prime target that several other science teams have also been granted time to observe them.

Finding traces of life there, if they exist, will still take time, according to Lim. But "everything we're doing this year are really important steps to get to that ultimate goal."