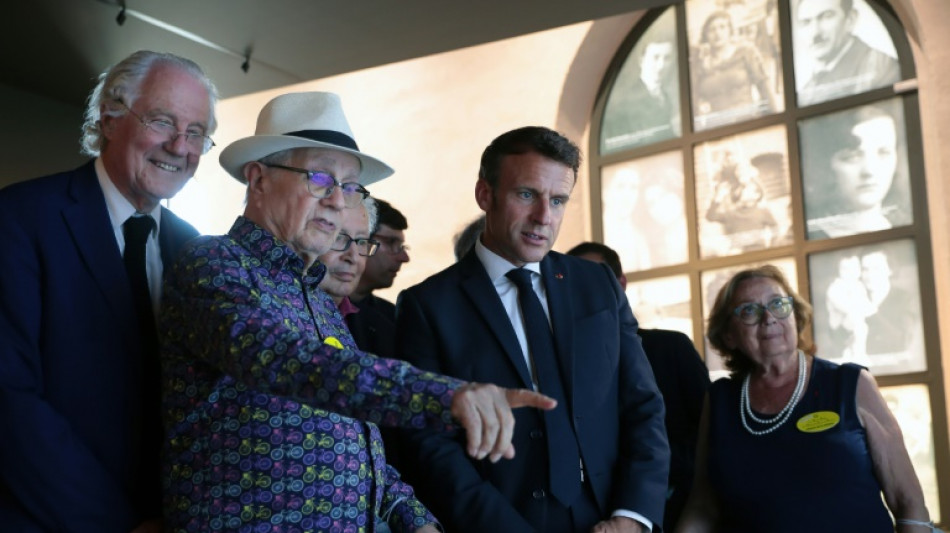 French President Emmanuel Macron on Sunday marked the 80th anniversary of the wartime round-up of Jews in France by calling for redoubled vigilance against the growing anti-Semitism in the country.

Macron delivered his speech at the former railway station in Pithiviers, 100 kilometres (60 miles) south of Paris, where 8,100 French Jews, including 4,400 children, were deported to Auschwitz.

Also attending the ceremony were some of the few survivors of those deported on the convoys sent to the Nazi camp.

"Eight decades ago, Vichy France betrayed these children by delivering thousands of them to their executioners," said Macron, referring to the French wartime regime that collaborated with the Nazi occupiers.

"It is the duty of France, to be true to itself, to recognize this and to concede nothing to this contemporary fight against anti-Semitism."

The incident has become known as the Vel d'Hiv round-ups because many of those arrested, including the elderly and sick, were initially held at the Velodrome d'Hiver, a cycle racing track in Paris's 15th arrondissement.

From there, they were taken to camps at Pithiviers and other locations then onto the Nazi concentration camps. Only a few dozen ever returned.

"We are not done with antisemitism, and we must make a lucid assessment of it," said Macron.

"This anti-Semitism is even more burning, rampant, than it was in 1995, in our country, in Europe, and in so many places in the world," he stressed.

Macron was referring back to the words of one of his predecessors Jacques Chirac, who in 1995 acknowledged France's responsibility for the Vel d'Hiv round ups.

"These dark hours stain our history forever," said Chirac in a landmark speech. "On that day, France accomplished the irreparable".

After Chirac, Francois Hollande went further during his presidency, speaking in a 2012 speech of a crime "committed in France, by France".

Then in 2017 Macron, newly elected as president, reaffirmed France's responsibility for the round-up in a speech marking its 75th anniversary and in the presence of then Israeli premier Benjamin Netanyahu.

But Macron was himself criticised for saying in 2018 that France's Philippe Petain, who headed the Vichy regime, had been a "great soldier" during World War I, even if he had subsequently made "fatal choices".

On Sunday Macron warned that in the modern world anti-semitism "can take on other faces, drape itself in other words, other caricatures".

"But the odious anti-Semitism is there, it prowls around, always alive, persistent, stubborn, coming back", he continued, citing "terrorist barbarity", "murders and crimes", resurgences on "social networks" and the desecration of graves.

It is found, the French leader added, in debates on television, "It plays on the complacency of certain political forces. It also thrives on a new form of historical revisionism, even negationism," he said.

He did not make any direct reference to far-right presidential candidate Eric Zemmour, who had argued that Petain had "saved" French Jews.

That claim is contested by most historians, who point to the wartime leader's well-documented anti-Semitism.

Pithiviers railway station, which has not served passengers since the end of the 1960s, has been converted into a memorial to the Holocaust which opened earlier this month.

"This station is the place where the French event becomes European genocide," said Jacques Fredj, the director of the Shoah Memorial, which commemorates the French deportations.

"It is a place of memory unique in France."