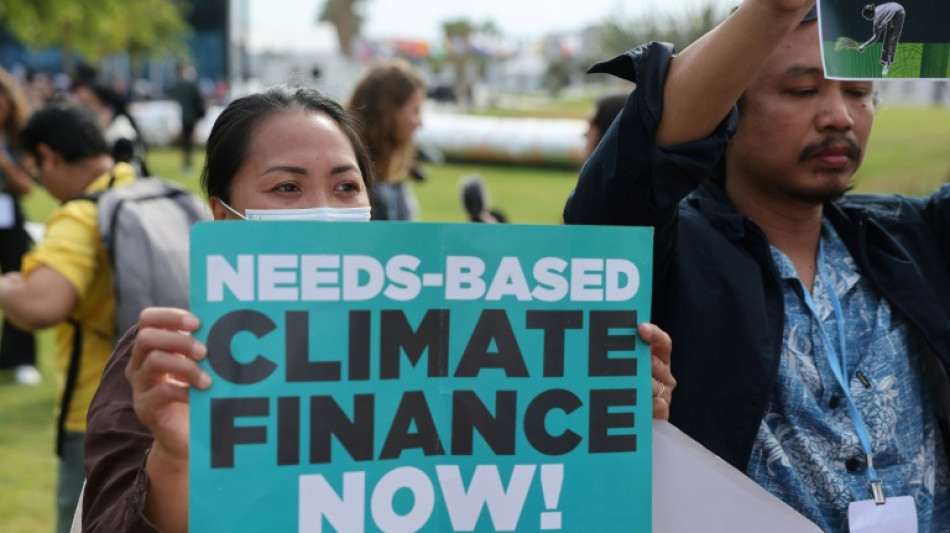 Climate negotiators were locked in efforts to break the deadlock at UN COP27 talks Friday as nations tussle over funding for developing countries battered by weather disasters and ambition on curbing global warming.

Representatives from nearly 200 countries have gathered at the COP27 in Egypt for two weeks with the aim of driving forward action on climate change as the world faces a worsening onslaught of weather extremes.

As the summit in the Red Sea resort of Sharm el-Sheikh spilled into overtime late Friday, the controversial issue of climate "loss and damage" funding remained a key flashpoint.

With wealthy and developing nations struggling to find common ground as talks went into the night, sources said Britain and several other countries, as well as the Alliance of Small Island States negotiating bloc, were circulating ideas in an attempt to find a compromise solution.

For many vulnerable countries loss and damage is the defining issue of the conference, with some saying the success of the meeting hinges on the creation of a specific fund at the Egypt talks.

Richer countries, which have previously baulked at the issue over fears of open-ended liability, have accepted that countries in the crosshairs of increasingly destructive climate-driven disasters need funding help, but have called for a broader set of donors -- and prioritising the most climate-vulnerable countries as recipients.

They are also keen to steer the focus onto other critical issues, like finding agreement on emissions-cutting ambitions and reaffirming a goal to limit average warming to 1.5 degrees Celsius from pre-industrial levels, which scientists say is a safer guardrail to avoid the most dangerous impacts.

A cascade of climate-driven extremes in recent months -- from floods in Pakistan and Nigeria to heatwaves and droughts across the world -- have shone a spotlight on the ferocious impacts of a warming world for emerging economies, as well as small island states threatened by sea level rise.

The G77 and China bloc of 134 developing countries launched an opening gambit on loss and damage this week, with a proposal to create a fund at COP27, with operational details to be agreed later.

A compromise response from the European Union, proposed late Thursday, suggested a fund specifically for the most vulnerable nations saying the money should come from a "broad funder base" -- code for countries including China and Saudi Arabia that have become wealthier since they were listed as developing nations in 1992.

"I have to say this is our final offer," European Commission Vice President Frans Timmermans told reporters on Friday morning.

But with countries still unable to come to an agreement, Britain and several other nations circulated a new draft proposal document, seen by AFP and confirmed by a source close to the negotiations, which suggested the fund could be part of a range of "funding arrangements".

The document, which has not been formally submitted to the UN process, suggested the new source of monies could be operationalised in two years.

This would "only agree some ambiguous funding arrangements that kick the can down the road" said Mohamed Adow, of the think tank Power Shift Africa.

One key country, the United States, has remained discreet, although a State Department spokesperson confirmed the parties are continuing to negotiate.

"It's crunch time," Rachel Cleetus, lead economist at the Union of Concerned Scientists' climate programme, told AFP. "There's no time anymore for the US to sit on the sidelines."

She said the United States and China, the world's two biggest polluters, "can really unlock this" in view of a thaw in climate relations following a meeting between Presidents Joe Biden and Xi Jinping earlier this week in Bali.

That may be complicated by confirmation late Friday that US climate envoy John Kerry had tested positive for Covid-19 and was self-isolating.

His spokesperson Whitney Smith said he was continuing to work with his team "and foreign counterparts by phone to ensure a successful outcome of COP27".

Canadian Environment Minister Steven Guilbeault told reporters earlier that countries were "close" to an agreement on loss and damage but that "the funds should include all large emitters, which would include a country like China, and Saudi Arabia and Qatar".

Timmermans said he had explained the EU proposal to US delegates who were "very interested in seeing" the 1.5C target reaffirmed.

Vulnerable nations and many wealthy emitters have stressed the need to maintain the 1.5C goal, while observers are calling for stronger language in the final COP27 statement on curbing planet-heating fossil fuels.