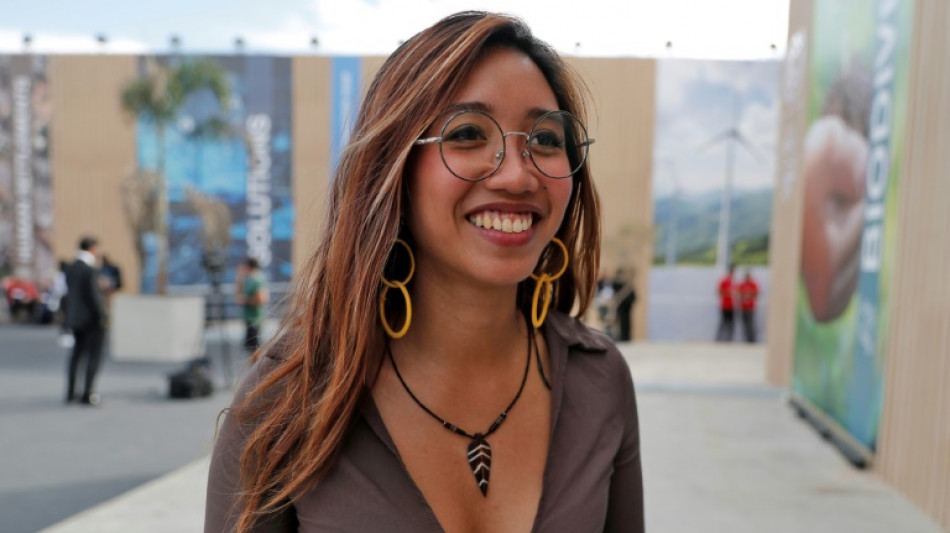 A fierce defender of climate voices from the world's developing countries, Mitzi Jonelle Tan has brought her call for climate justice to the COP27 summit in Egypt.

It is the same fight she takes up daily in her native Philippines, where such activism can be dangerous work.

The 25-year-old sees first-hand the impacts of climate change on her homeland.

Tan's home city, Marikina, is regularly buffeted by typhoons and Manila, the capital, is threatened by rising sea levels. The acidification of the world's oceans could ruin the livelihood of millions of fishermen across the archipelagic nation.

But she also witnesses the repression of those struggling to push environmental causes, saying she was "illegally detained" when protesting against Filipino mining interests in 2018.

"The Philippines is one of the most dangerous countries in the world for environmental defenders and activists," Tan told AFP, peering through her signature round glasses.

The British human rights group Global Witness estimates that of 200 environmental defenders killed worldwide in 2021, 19 lived in the Philippines.

"This is what happens when you threaten business as usual," Tan said, listing off on her ringed fingers the interests of "multinational companies, mining companies, and the military" that accuse activists like her of "terrorism."

Tan began her activism in 2017 after meeting an indigenous leader who related to her community's experiences of harassment, displacement and violence.

"That's why we have to fight back," she said.

Since then, she has been at the forefront of the fight for climate justice in her home country and beyond.

During her time at COP27, in the Egyptian resort town of Sharm el-Sheikh, along with moderating discussions and giving press interviews, Tan has led protests demanding the negotiators and world leaders sitting in the conference halls act more urgently for climate justice.

According to UNICEF's Thomas Sayers, "it is young people like Mitzi that give us hope for the future of this planet".

At that point the Swedish activist had led student climate strikes for two years, since the age of 15.

The marches grew to bring hundreds of thousands of young people together, predominantly in wealthy nations -- Australia, Belgium, Canada, Germany and the United States -- rather than in developing countries.

Thunberg, a notable absentee from COP27 over concerns of greenwashing and restrictions on civil liberties in Egypt, said she was "handing over the megaphone" to those "most affected by the climate crisis".

Within FFF, Tan helped create the "Most Affected People and Areas" sub-group.

According to an open letter to world leaders, the members campaign to link the climate crisis with global "systemic injustices".

"We must change the paradigm, move from a system that favours profit to one that gives priority to the planet and its inhabitants," she said, rejecting the current loans system for financing climate action.

According to the Organisation for Economic Co-operation and Development, 71 percent of all public climate finance in 2020 was sourced from loans.

"There is an analogy where you hit my car and I have to borrow money from you to fix it -- it doesn't make sense," she said, arguing that wealthy Global North countries "have a debt to pay" for climate change.

A natural with a megaphone, using succinct arguments punctuated by passionate gesturing with her tattooed arms, Tan has won over both her own and older generations.

"Mitzi brings with her the uniqueness of her generation," said compatriot and veteran environmental activist Ana Gabriela Celestial.

"She is a digital native, she is more creative, she is an influencer and an effective youth climate activist," she added.

"More and more young people are seeing their power," Tan said, insisting they "do not accept a world that is burning, sinking and drowning."