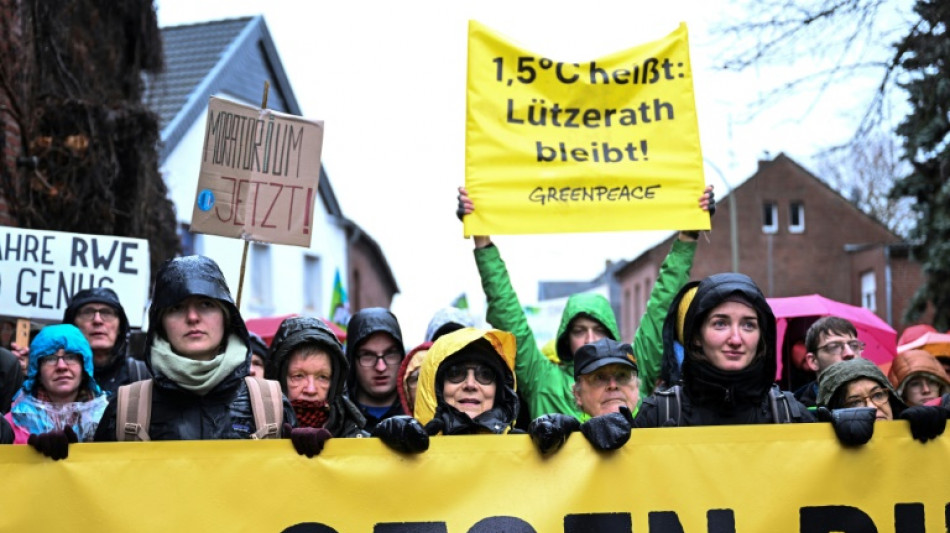 Climate activist Greta Thunberg and thousands of demonstrators marched in a large-scale protest in Germany on Saturday against the demolition of a village to make way for an open-cast coal mine extension.

Crowds of activists marched on the hamlet of Luetzerath in western Germany, waving banners, chanting and accompanied by a brass band.

Luetzerath -- deserted for some time by its original inhabitants -- is set to disappear to make way for the extension of the adjacent open-cast coal mine, one of the largest in Europe, operated by energy firm RWE.

Thunberg marched at the front of the procession as demonstrators converged on the village, showing support for activists occupying it in protest over the coal mine extension.

Some clashed with police who were trying to move the march away from Luetzerath, which is surrounded by fences.

In an operation launched earlier this week, hundreds of police have been working to remove activists from the hamlet.

But between 20 and 40 climate militants were still holed up in the contested village late on Friday, a spokeswoman for the protest movement said.

Authorities said they were entering the final stages of evacuating the activists. In just a few days, a large part of the protesters' camp has been cleared by police and its occupants evacuated.

German press, quoting the police, reported that around 470 activists had been removed from the village since the beginning of the evacuation.

Demolition works were progressing slowly on the buildings that had been emptied, while surrounding trees were felled, an AFP journalist saw on Friday.

Large numbers of protesters -- Thunberg among them -- had assembled on Saturday close to the village, which has become a symbol of resistance against fossil fuels.

"Against the evacuation -- for an end to coal and climate justice," is the rallying call for the protest.

Police reinforcements have come from across the country to participate in the forced evacuation.

Organisers are hoping that tens of thousands will attend, while police have said they expect around 8,000.

In the village, many of the activists have built structures high up in the trees, while others have climbed to the top of abandoned buildings and barns.

Likewise, activists said they had dug a tunnel under the hamlet in a bid to complicate the evacuation effort.

The movement has been supported by protest actions across Germany. On Friday, masked activists set fire to bins and painted slogans on the offices of the Greens in Berlin.

Following the energy crisis set off by the Russian invasion of Ukraine, the government has brought old coal power plants back online.

Officials also signed a compromise deal with RWE that made way for the demolition of Luetzerath but spared five nearby villages.