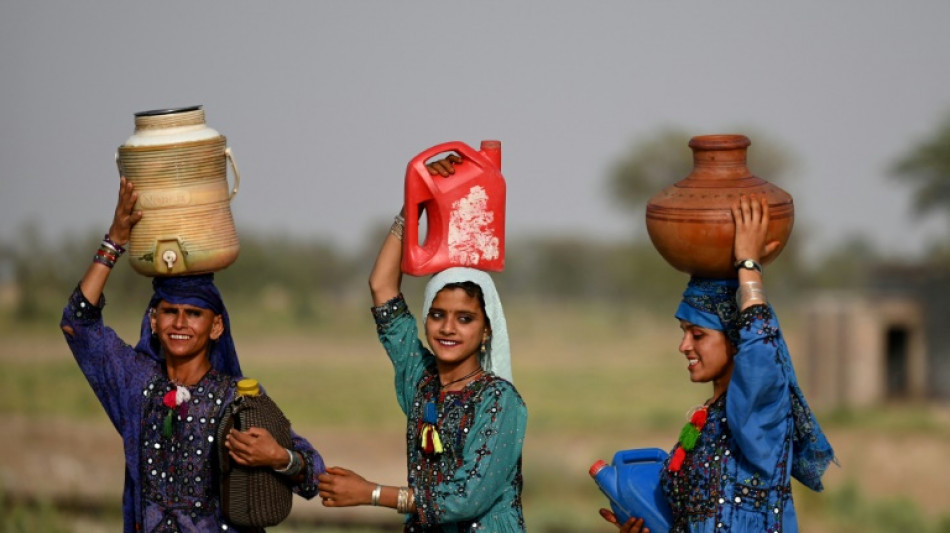 Pakistan was in the grip of a heatwave on Friday, with parts of the nation previously scalded by temperatures of nearly 50 degrees Celsius as officials warned of acute water shortages and a health threat.

Swathes of the country have been smothered by high temperatures since late April, in extreme weather the World Meteorological Organization (WMO) has warned is consistent with climate change.

On Thursday the city of Jacobabad in Sindh province hit 49.5C (121 degrees Fahrenheit), the Pakistan Meteorological Department (PMD) said, with temperatures forecast to remain high until the end of the week.

"It's like fire burning all around," said labourer Shafi Mohammad, who is from a village on the outskirts of Jacobabad where residents struggle to find reliable access to drinking water.

Nationwide, the PMD alerted temperatures were between 6C and 9C above normal, with the capital Islamabad -- as well as provincial hubs Karachi, Lahore and Peshawar -- recording temperatures around 40C on Friday.

Jacobabad nurse Bashir Ahmed says that, for the past six years, heat stroke cases in the city have been diagnosed earlier in the year -- starting in May, rather than June or July.

"This is just increasing," he said.

Punjab province irrigation spokesman Adnan Hassan said the Indus river -- Pakistan's key waterway -- had shrunk by 65 per cent "due to a lack of rains and snow" this year.

Sheep have reportedly died from heatstroke and dehydration in the Cholistan Desert of Punjab -- Pakistan's most populous province, which also serves as the national breadbasket.

"There is a real danger of a shortfall in food and crop supply this year in the country should the water shortage persist," Hassan said.

On Tuesday climate minister Sherry Rehman warned residents in the megacity of Lahore "to take cover for the hottest hours of the day".

The heatwave has also ravaged India, with temperatures in parts of Rajasthan hitting 48.1C on Thursday.

Pakistan -- home to 220 million -- says it is responsible for less than one percent of global greenhouse gas emissions.

But it ranks as the nation eighth most affected by extreme weather events, according to a 2021 study by environmental group Germanwatch.

The mountainous portions of the country are home to more than 7,000 glaciers, a number larger than any region outside the poles.

Quickly melting glaciers can swell lakes, which then burst their banks and unleash torrents of ice, rock and water in events known as glacial lake outburst floods.

Last weekend a key highway bridge in the Gilgit-Baltistan region was swept away in flash flooding caused by glacier melting.

In April, officials warned there were 33 lakes in Pakistan in danger of unleashing similar dangerous deluges.