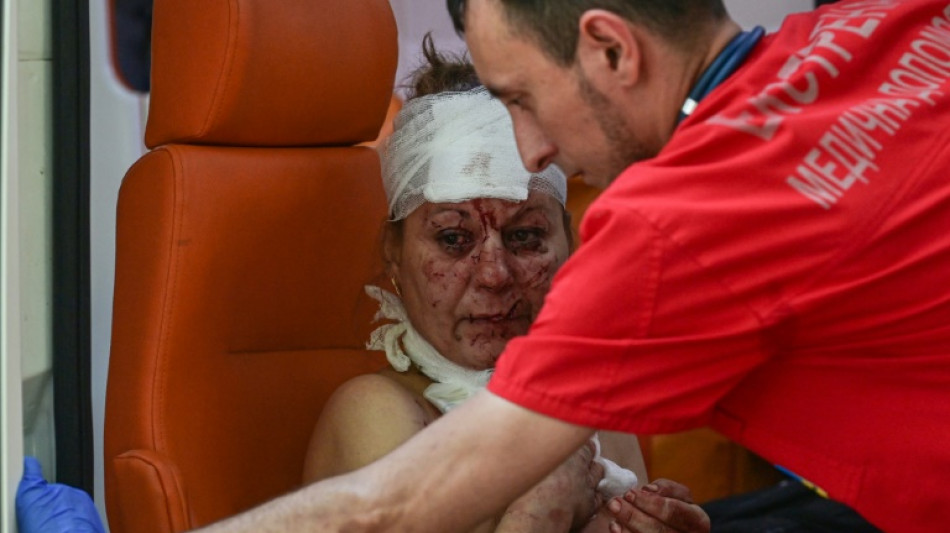 Russian forces left a trail of destruction Thursday as they sought to push deeper into the eastern Donbas region, as Kyiv thanked outgoing British leader Boris Johnson for his support.

Diplomatic tensions mounted between Ankara and Kyiv, where Ukrainian officials have accused Turkey of ignoring calls to seize grain being transported by a Russian ship.

A Russian air strike in the eastern industrial city of Kramatorsk left at least one dead and several others wounded earlier in the day, as Russian seeks full control of the surrounding Donbas.

The explosion left a gaping crater next to a hotel and residential buildings and several cars were on the fire, AFP journalists said, as emergency services arrived on the scene.

Kyiv hailed Johnson, one of the embattled country's keenest allies throughout the war, as the British leader made the first step towards leaving office but said the UK would continue supporting Ukraine for "as long as it takes".

The head of Ukraine's battled-scarred Donetsk region Pavlo Kyrylenko announced before the strike on Kramatorsk that Russian bombardments had killed at least seven people over the past 24 hours.

The fatalities came after Ukrainian officials re-issued urgent pleas for civilians in the surrounding region to flee, as Russian forces turn their sights on the nearby eastern city of Sloviansk.

Vitaliy, a plumber, told AFP in the industrial hub that his wife and her daughter from a previous marriage, who is six months pregnant, were evacuated from the city the day before.

"Tomorrow I will join the army," he said.

Sloviansk mayor Vadym Lyakh said around 23,000 people remained from a pre-war population of 110,000.

"Evacuation is ongoing. We take people out every day," he said.

"The city is well fortified," he added, claiming Russian forces had been unable to surround the city.

Sloviansk is Russia's next target after their capture of the nearby sister cities of Severodonetsk and Lysychansk.

Russian forces captured the cities in the Lugansk region after long battles, consolidating their hold in the east after failing at the start of the February invasion to take the capital kyiv and Ukraine's second-largest city Kharkiv.

A diplomatic crisis too was flaring between Ukraine and Turkey over the apparent transport by Russia of grain allegedly stolen from Ukraine.

Kyiv says that a 7,000-tonne vessel, the Zhibek Zholy, set off from Ukraine's Kremlin-occupied port of Berdyansk after picking up confiscated wheat and called last week for Turkey to seize it.

The marinetraffic.com website on Thursday showed the vessel moving away from Turkey's Black Sea port of Karasu before apparently switching off its transponder and disappearing from view.

Ukraine said it was "deeply disappointed" that Turkey had not acted on its request to seize the ship.

Kyiv was also reeling from the shock of losing one of its most vocal allies in the conflict with Russia, UK Prime Minister Johnson.

"We all welcome this news with sadness. Not only me, but also all of Ukrainian society," President Volodymyr Zelensky said, after Johnson resigned as leader of Britain's Conservative party, paving the way for the selection of a new prime minister.

"We don't doubt that Great Britain's support will continue, but your personal leadership and your charisma made it special," he said.

"Their accuracy is exactly as it should be," he said.

Ukraine also said it had regained control of Snake Island in the Black Sea, after raising its flag there this week following the withdrawal of Russian forces.

Senior military official Oleksiy Gromov said Ukrainian forces had "effectively re-established... control over Snake Island," but did not specify whether there was a lasting military presence on the rocky outcrop.

Russia said it pulled back from the symbolic island last week in a gesture of "good will", but has since continued targeting positions on the island.

The Russian defence ministry said it had carried out "precision" missile strikes on the island early Thursday, killing Ukrainian soldiers and forcing survivors to flee.

Finland meanwhile passed legislation to build stronger fences on its border with Russia, as the country seeks to join NATO following the invasion.