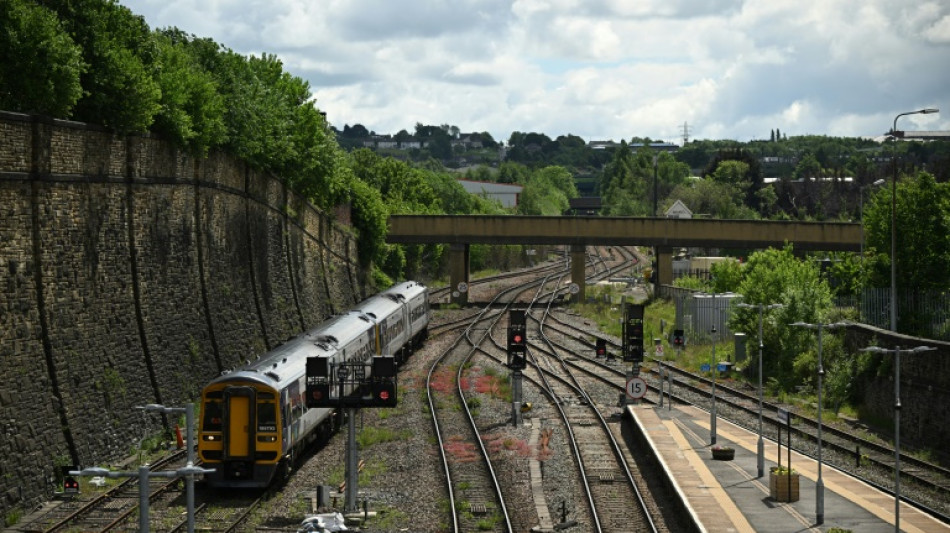 Every 10 to 20 minutes a train rolls into Bradford's main station. On the platform, the driver then gets out and walks to the other end of the carriages before continuing the journey.

The time-consuming routine occurs daily because Bradford -- England's sixth biggest city -- has no through-station, forcing trains to reverse to continue along the line.

Regional leaders have long demanded a solution to shortcomings in infrastructure like this one, which highlight the wealth gap between places in the north like Bradford and more affluent areas in the south.

When Prime Minister Boris Johnson won a landslide election in 2019 vowing to "level up" places like Bradford, it appeared poised to happen.

But two years later his government announced rail modernisation plans without the planned through-station on a proposed high-speed line between nearby Manchester and Leeds -- disappointing locals.

More modest upgrades were approved instead.

It fuelled suspicions Johnson could not be trusted over the pledge.

"We're asking for what the rest of Europe and the south (of England) expect," she told AFP.

"We're trying to catch up. So not investing... is madness really because there's such an opportunity."

But critics argue there has been little tangible progress since, with some analyses showing the situation worsening.

Fresh doubt was sown this week when Johnson sacked the minister in charge of delivering the policy, before himself quitting as ruling party leader.

Mike Cartwright, of West Yorkshire's chamber of commerce, called "levelling up" a "wonderful catchphrase or slogan" -- but said there was a lack of material action.

A much-anticipated government policy paper last year was a "missed opportunity" and the region felt "short-changed" so far, he said, praising the ambition but emphasising the importance of outcomes.

The Labour leader of the city council, Susan Hinchcliffe, agreed, saying investment in places like Bradford was key "if levelling up is to mean anything".

Bradford and surrounding towns have received some extra resources, including "levelling up funds" and being designated an "education investment area".

The wider West Yorkshire region also got its own directly elected mayor last year and is set for further devolution.

But as London in May saw the opening of a new £18.9 billion ($22.7 billion) cross-city rail line, Bradford locals are furious at their cancelled project.

"It just felt a bit like we've got forgotten about again," said Josie Barlow, a food bank manager who received a levelling up grant to help buy the building it operates from.

She added they were "really grateful" for the £225,000 but that the city needed bigger infrastructure investment.

Bradford -- once a wool-producing powerhouse -- is now the fifth most income-deprived city nationwide, the government's last poverty index in 2019 showed.

Clare Harrigan, development director of Beyond Housing, which rents out many of the low-rise properties, called the £711,000 grant "the green shoots" of levelling up.

"This is just an example of where it has made a difference," she told AFP.

Sandra Cottrell, 64, who has lived in the Church Lane Estate for decades, said it had become "a mess", and the wider region had been neglected by successive governments.

"We were living in squalor until all this started," she said, as workers fitted insulation and landscaped the grounds.

Despite the new investment, and ambitious plans to turn the nearby Teesside Steelworks into a hub for industries including offshore wind, Cottrell is sceptical of Johnson's lofty aims.

"I don't believe anything he says," she told AFP, mirroring countless polls showing most Britons now mistrust him after lockdown-breaking parties at Downing Street.

"I just think he talks a load of rubbish."

Johnson will soon be talking as a former prime minister. Whether his signature policy lives on remains to be seen.