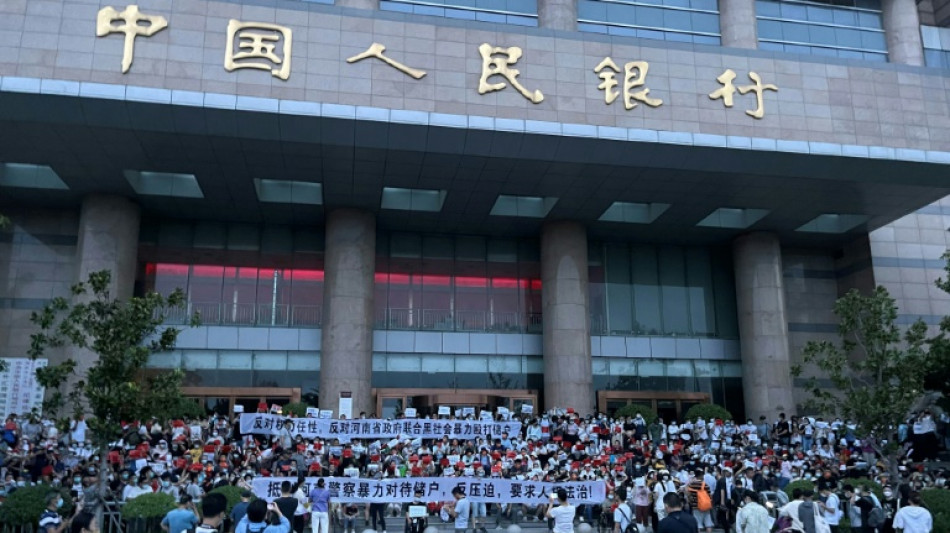 Members of a "criminal gang" accused of taking control of local banks have been arrested in central China after rare protests over alleged financial corruption sparked violent clashes between customers and authorities.

Hit hard by the country's economic slowdown, four banks in Henan province have since mid-April frozen all cash withdrawals, leaving thousands of small savers without funds and sparking sporadic demonstrations.

In one of the largest such rallies yet, hundreds gathered Sunday outside a branch of the People's Bank of China in Henan's capital Zhengzhou demanding their money, according to multiple witnesses who declined to be named.

Local authorities did not immediately comment on the protests, but police in nearby Xuchang city said late Sunday that they had arrested members of an alleged "criminal gang" for their suspected involvement in a scheme to gain control of local banks.

The gang made illegal transfers through fictitious loans and used their shareholdings -- as well as "manipulation of executives" -- to effectively take over several local banks starting in 2011, police said.

The province's banking and insurance regulator also said late Sunday that it was "accelerating" plans to tackle the local financial crisis and "protect the legal rights and interests of the broader public."

Footage of Sunday's rally showed the protestors throwing objects, while one participant told AFP on Sunday that demonstrators were hit and injured by unidentified men.

Another video verified by AFP showed a crying woman complaining about her lost money being forced onto a bus by police.

Another man with a swollen eye said he had been beaten by "gangsters" and dragged onto the bus by police.

Some demonstrators accused officials of colluding with local banks to suppress rallies, and provincial authorities were suspected last month of abusing the country's mandatory health code to effectively bar protestors from public spaces.

Demonstrations are relatively rare in tightly controlled China, where authorities enforce social stability at all cost and where opposition is swiftly repressed.

But desperate citizens have occasionally succeeded in organising mass gatherings, usually when their targets are local governments or individual corporations rather than the Communist Party itself.

The demonstrators in Henan largely drew sympathy on Chinese social media on Monday, with many on the Weibo platform pointing the finger at local officials.

"Why are you treating ordinary people like this?" one Weibo user asked in a post on Monday.