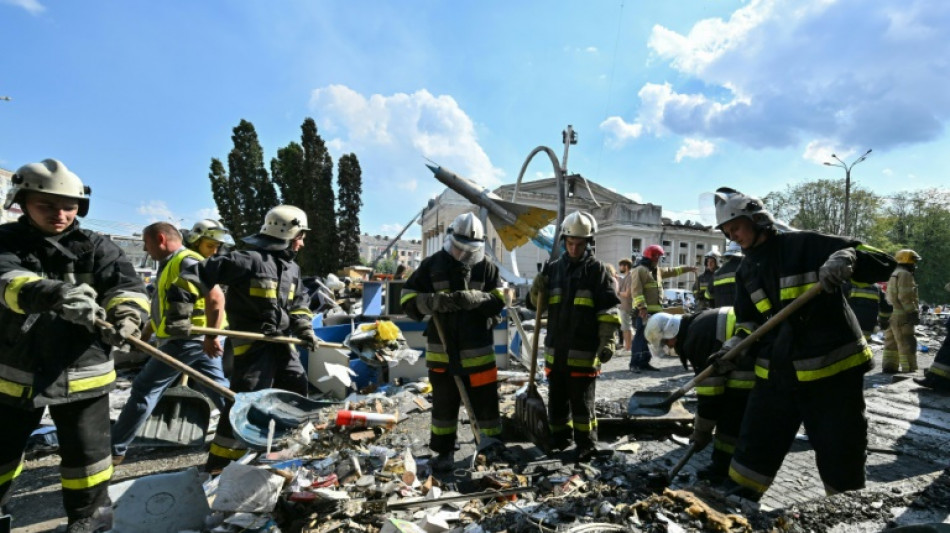 Ukrainian rescuers on Friday continued search operations in the central city of Vinnytsia, where Russian strikes killed at least 23 people, including children.

The charred remains of upturned cars surrounded by burnt debris were seen in images distributed by officials following the attack on Thursday on the city hundreds of kilometres from the front lines.

In his daily address to the nation late on Thursday, Ukraine's President Volodymyr Zelensky said the toll was likely to rise. Dozens are still missing and many hospitalised in critical condition.

"No other state in the world poses such a terrorist threat as Russia," a somber Zelensky said.

"No other state in the world allows itself to destroy peaceful cities and ordinary human life with cruise missiles and rocket artillery on a daily basis."

United Nations Secretary General Antonio Guterres said he was "appalled" by the attack, while the European Union condemned it as an "atrocity." Both called for accountability.

The president's office said in its morning military update on Friday that 18 people were still missing following the Vinnytsia strikes and 73 were in hospital with injuries.

Ukrainian rescuers said they were continuing to clear debris on Friday and over four hundred people were involved in the operations.

Ukrainian officials have identified one of the victims as a four-year-old girl called Liza, who was outside with her mother during the attack.

On Thursday, Zelensky led a moment of silence during an address in The Hague before urging European and International Criminal Court (ICC) officials to open a "special tribunal" into Russia's invasion.

"I believe it is inevitable that (the) International Criminal Court will bring accountability to those guilty of crimes under its jurisdiction -- war crimes, crimes against humanity, genocide."

The ICC in The Hague opened an investigation into possible war crimes in Ukraine just days after Moscow's forces invaded and it dispatched dozens of investigators to the country to gather evidence.

Russia invaded on February 24 and the conflict has killed thousands of people, destroyed cities and forced millions to flee their homes.

"Every day Russia kills civilians, kills Ukrainian children, carries out missile attacks on the civilian facilities where there is no military target. What is this, if not an open act of terrorism?" Zelensky said on Thursday after the Vinnytsia attack.

Deadly strikes in central Ukraine have become relatively rare, but the war has raged around cities like Mykolaiv in the south, where officials said two universities were hit by strikes on Friday morning.

In his tweet he shared a video of large clouds of black smoke billowing into the sky from one of the city buildings.

The city's mayor, Oleksandr Sienkevych, said two people were wounded in the attacks but there were no casualties.

The heaviest fighting in Ukraine, however, has focused recently on the industrial Donbas region in the east.

Moscow-backed separatists said on Friday they were closing in on Siversk -- their next target, after wresting control of sister cities Lysychansk and Severodonetsk two weeks ago.

"The Ukrainian command has decided to gradually pull out its units out of the town of Siversk," Andrey Marochko, a spokesman for the separatist forces, told Russian state news agency TASS.

An official for the Donetsk separatists, Daniil Versonov, said their fighters were in small groups "clearing" the eastern districts of Siversk.

AFP could not independently verify these claims.

Delegations from Kyiv and Moscow met in Istanbul this week to discuss unblocking Ukraine's grain exports.

The meeting involving UN and Turkish officials ended after more than three hours with an agreement to meet again in Turkey next week.

Zelensky said "the entire world" was counting on the negotiations to finalise a deal.

The conflict has pushed up grain prices and Europe is suffering from sky-rocketing energy bills stemming from sanctions on Russia and Moscow's move to limit gas flows to Europe.

The European Commission meanwhile slashed growth forecasts for the eurozone, saying the consequences from the war in Ukraine were continuing to destabilise the economy because of record high inflation.