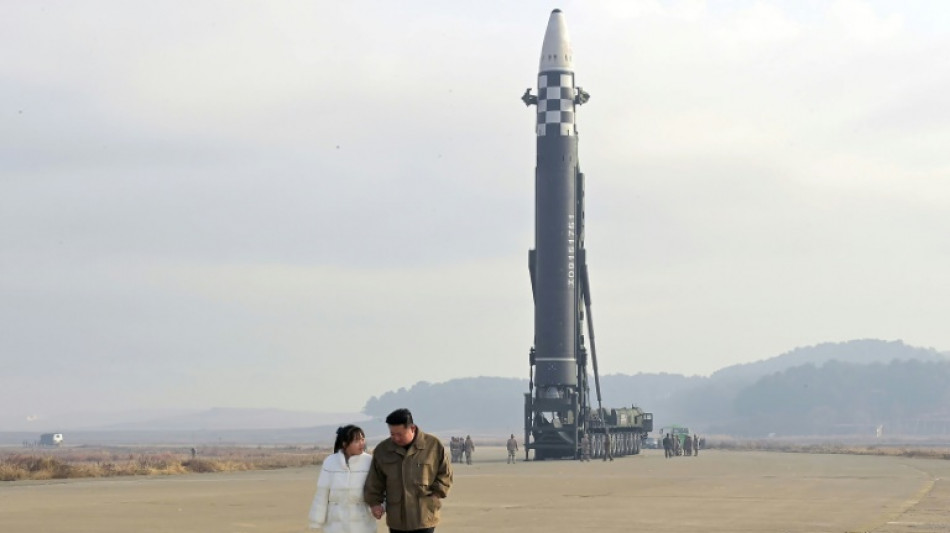 Kim Jong Un unveiled the fourth generation of his ruling family Saturday, appearing in photographs with his daughter for the first time ever, giving analysts a clear indication of his dynastic vision for North Korea.

State media has never mentioned Kim's children -- the regime has not even officially confirmed they exist -- but on Saturday, KCNA reported that Kim, "together with his beloved daughter and wife", oversaw the launch of an intercontinental ballistic missile.

Pictures showed a beaming Kim holding hands with an adoring girl in a white puffer jacket and red shoes, walking in front of a giant black-and-white missile and appearing to celebrate a successful test.

Kim -- the grandson of North Korea's founding leader Kim Il Sung and the third generation of the Kim family to lead the country -- married his wife Ri Sol Ju, in 2009, according to Seoul's spy agency.

She gave birth to their first child the following year, with their second and third born in 2013 and 2017, the agency has said.

The only previous confirmation of the children's existence had come from former NBA star Dennis Rodman, who made a quixotic visit to the North in 2013 and claimed he'd met a daughter of Kim's called Ju Ae.

The North Korean leader was "a good dad", Rodman said at the time.

The daughter revealed in the photographs is presumed to be Ju Ae, Cheong Seong-chang of the Center for North Korea Studies at the Sejong Institute in South Korea told AFP, adding that she was the equivalent of a North Korean "princess".

Now that her identity has been revealed, she will likely be able to participate in state affairs, he said, adding her appearance with her father could even indicate she was his anointed successor.

Kim Jong Un's own father, Kim Jong Il, selected him to be his successor over his elder children because he most resembled him, Cheong said.

"Kim Jong Un may want to do the same with this particular daughter. Perhaps she has the qualities that Kim thinks are a lot like his," he said, adding if she continued to accompany her father to important events it would be an indication this was the case.

North Korea has fired scores of ballistic missiles this year, far more than any other year on record.

Japan said Friday's ICBM launch likely had the range to hit the US mainland.

To introduce Kim's daughter to the world at this juncture could be a message to the world that the North Korean regime is not going away, analyst Soo Kim told AFP.

"In a way, it's a symbolic picture of Kim passing the sceptre of rule to the next generation," she said, which sends "a message to the international community to accept and brace for North Korea's fourth iteration of terror and belligerence".

She said that the photos also suggest "a degree of closeness and comfort between Kim and his daughter", which could indicate that she is being groomed for future leadership.

The photographs may also be part of a carefully stage-managed attempt by Pyongyang to show Kim is a "normal" leader, North Korean studies scholar Ahn Chan-il told AFP.

"Pyongyang seems to be trying to brand itself as a 'normal' nation -- while conducting these ICBM launches that show off its military prowess -- by showing images of Kim being a seemingly loving father," Ahn said.

"It is also a gesture of stabilising the regime by declaring to the outside world that it is now heading for its fourth-generation succession and that it is well-prepared for it."

Including his wife in the public appearance and "especially his daughter 'soften' the image, at least [maybe] for domestic audience," North Korea expert John Delury wrote on Twitter.

"This is not a warmonger or narcissistic Little Rocket Man. He's a good Dad, protecting his family, like he protects the Nation," he added.

Other analysts said the timing and location of the daughter's introduction to the world -- at an ICBM launch -- was disturbing.

It is the "most messed up bring-your-kid-to-work day," said US-based security expert Ankit Panda on Twitter.