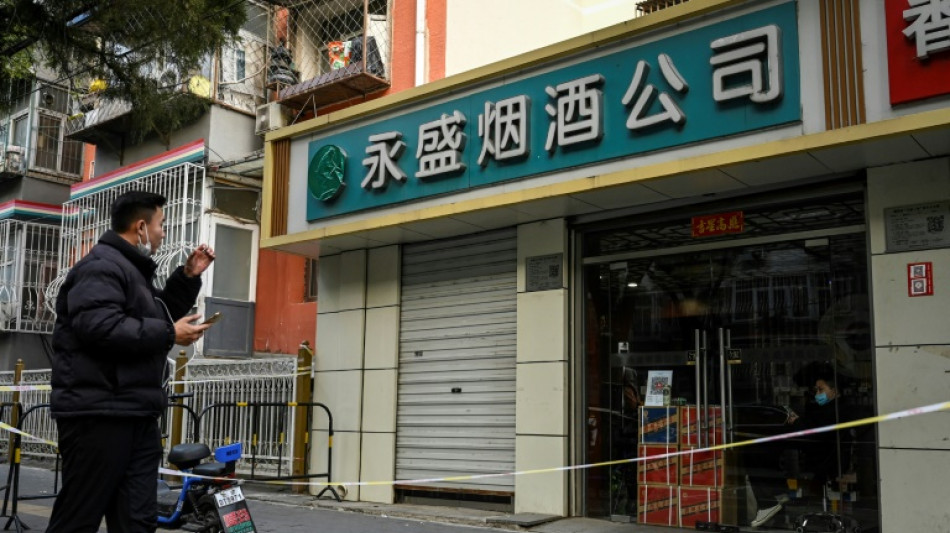 Brent North Sea crude slumped 5.5 percent to $82.84 per barrel and WTI shed 5.7 percent to $75.55 in mid-afternoon trading on fears over Chinese energy demand.

Paris, London, Frankfurt and Milan all ended in the red on Monday while Wall Street also lost ground.

The fall in European and US stocks came after most Asian markets including Hong Kong's Hang Seng Index and Shanghai ended lower, although Bangkok, Tokyo and Wellington were up.

The death of an 87-year-old man in Beijing on Sunday came as infections across China spiked, testing authorities' plans to loosen their grip by lowering quarantine times for foreigners and cancelling mass tests.

Two further Covid deaths were recorded on Monday, both elderly residents from Beijing.

The news threw a spanner in the works for investors who had grown hopeful of a gradual reopening of China's economy.

"Crude oil prices have slipped back sharply on the back of concerns over weakening Chinese demand, as well as reports that Saudi Arabia supports the idea of a production increase," noted Michael Hewson, chief market analyst at CMC Markets UK.

"No one can tell whether (Chinese President) Xi Jinping would pull back from the reopening plans, which would be another disaster for the Chinese stocks, and for the investor confidence," said Ipek Ozkardeskaya, senior analyst at Swissquote Bank.

Nevertheless, global markets have enjoyed a broadly healthy November thanks to signs of China easing and indications of slowing US inflation that fanned optimism the Federal Reserve would start to slow its pace of interest rate hikes.

But several officials soon lined up to warn that more needed to be done to get inflation back down from four-decade highs to more bearable levels.

Markets are meanwhile expected to stay relatively quiet for the rest of the week, with many US investors taking time off for Thanksgiving.

"With this also being a quiet day and week in terms of macro data, they are understandably keen to proceed with caution."