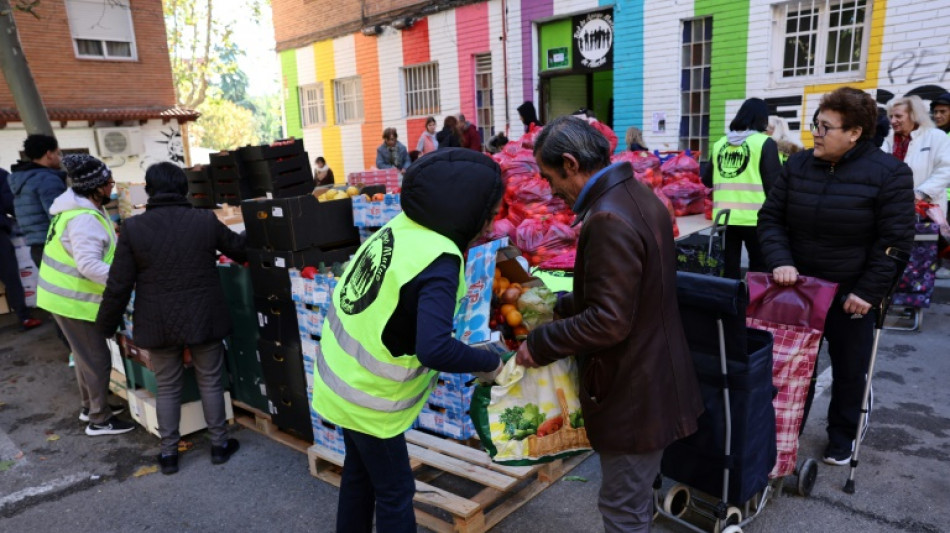 With a secure job as a bricklayer, Hugo Ramirez never thought he would need the help of charity to feed his family.

But with the cost of living soaring across Europe, the 44-year-old father of three is one of a growing number of people in Spain turning to food banks to make ends meet.

"We see prices increase every week, even for basic goods," he told AFP as he stood before wooden crates of fruits and vegetables at the entrance of a residential building in Madrid.

Driven by the war in Ukraine, Spanish food prices jumped 15.4 percent in October from a year earlier, their biggest increase in nearly three decades, according to the National Statistics Institute.

In a bid to ease the pressure on squeezed households, Socialist Prime Minister Pedro Sanchez's government -- which faces an election next year -- has spent billions of euros on extra welfare spending.

Every Saturday Ramirez, who is from Venezuela, comes to this food bank set up by a neighbourhood association in the working-class district of Aluche during the pandemic to pick up food supplies.

He earns 1,200 euros a month while his wife makes 600 euros working part time as a domestic helper.

After paying their monthly rent of 800 euros and 300 euros for utilities "there is not much left," he said.

The line of people seeking help stretched far down the street. Many of them are immigrants.

Similar lines, dubbed "hunger queues", can be seen regularly outside of other food banks across the country.

"Every week we see new families in need, especially since the start of the war in Ukraine" in February, said Raul Calzado, a volunteer with the Aluche neighbourhood association.

Some mothers have stopped buying feminine hygiene products to be able to feed their children, he added.

The association currently offers aid to 350 households, a number Calzado expects will rise to around 400 by the end of the year.

Behind him dozens of other volunteers are busy at work, surrounded by boxes of pasta, canned goods and baby diapers.

"Some beneficiaries have no revenues. But we also have more and more retirees with small pensions or people who work but whose salaries are insufficent," said the association's vice president, Elena Bermejo.

Among the measures Spain has introduced are subsidies for transport, a one-off payment of 200 euros for the unemployed and a 15 percent increase in pensions for the most vulnerable such as widows.

But charities that work with the poor say the measures are not enough.

"For some families, even buying a litre of olive oil or a kilo of lentils has become difficult," said Bermejo.

Food banks, which had started to see dome relief as people returned to work after pandemic shutdowns, are struggling to meet the growing demand.

"With inflation, we are seeing a decrease in donations" since people have less money, said the spokesman for the Spanish Federation of Food Banks, Luis Miguel Ruperez.

And higher prices also means food banks can afford to buy less food themselves, he added.

The federation collected 125,000 tonnes of food since January, compared to 131,000 tonnes during the same time last year.

Food banks provide help to over 186,000 people in the Madrid region, and 1.35 million in total in Spain -- roughly the same population as Barcelona, the country's second biggest city.

One household in seven in Spain suffers food insecurity, meaning inadequate or insecure access to food due to low income, according to a study published earlier this year by the University of Barcelona.

"I hope it will get better but I'm afraid that won't be the case," said Ramirez as he clutched a bag of groceries from the food bank.