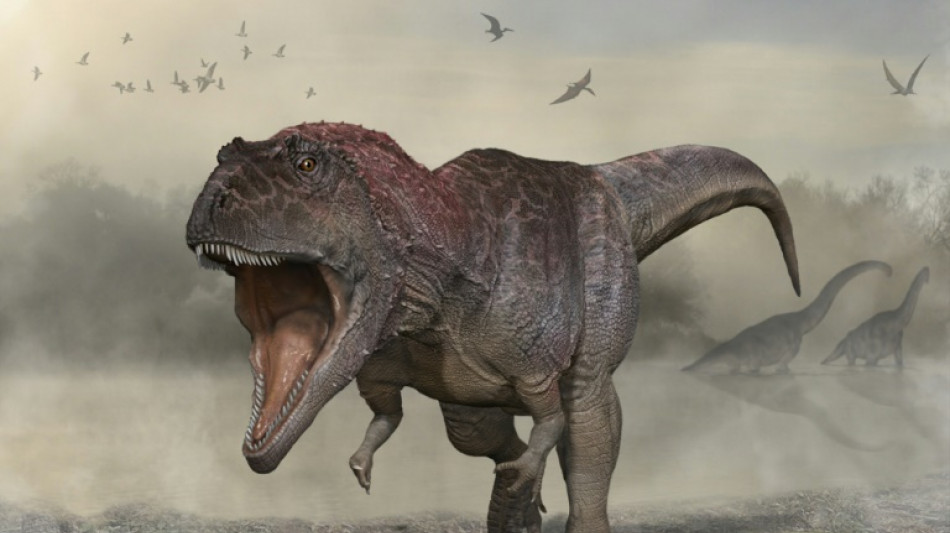 Paleontologists said Thursday they had discovered a new giant carnivorous dinosaur species that had a massive head and tiny arms, just like Tyrannosaurus rex.

The researchers' findings, published in the journal Current Biology, suggest that small forelimbs were no evolutionary accident, but rather gave apex predators of the time certain survival advantages.

Meraxes gigas -- named after a fictional dragon in the Game of Thrones book series -- was dug up over the course of four years during field expeditions in the northern Patagonia region of Argentina, starting with the skull which was found in 2012.

"We won the lottery and found it literally on the first morning," senior author Peter Makovicky from the University of Minnesota told AFP.

The fossilized remains were remarkably well preserved. The skull is just over four feet long (127 centimeters), while the entire animal would have been some 36 feet long, and weighed four metric tons.

Its arms were two feet long, "so it's literally half the length of the skull and the animal would not have been able to reach its mouth," said Makovicky.

T. rex didn't get its tiny arms from M. gigas. The latter went extinct 20 million years before the former arose, and the two species were far apart on the evolutionary tree.

Instead, the authors believe the fact that tyrannosaurids, carcharodontosaurids -- the group Meraxes belonged to -- and a third giant predator species called abelisaurids all evolved tiny arms points to certain benefits.

Makovicky believes that as their heads grew larger, it became the dominant tool of their predatory arsenal, taking on the function that forelimbs would have had in smaller species.

"I'm convinced that those proportionally tiny arms had some sort of function. The skeleton shows large muscle insertions and fully developed pectoral girdles, so the arm had strong muscles," he said in a statement.

"They may have used the arms for reproductive behavior such as holding the female during mating or support themselves to stand back up after a break or a fall."

Meraxes roamed the Earth between 90 to 100 million years ago during the Cretaceous, at a time when the region was wetter, more forested, and much closer to the sea, said Makovicky.

They would have preyed on a menagerie of contemporary sauropods -- some of whom were discovered at the same site.

The individual lived to around 40 years -- a ripe old age for dinosaurs -- and its skull was replete with crests, furrows, bumps and small hornlets.

"It certainly would have looked very imposing and gargoyle like," said Makovicky.

"Those are the kinds of features that in living animals are often under sexual selection," speculating the species used their massive skulls as "billboards" for advertising to would-be mates.